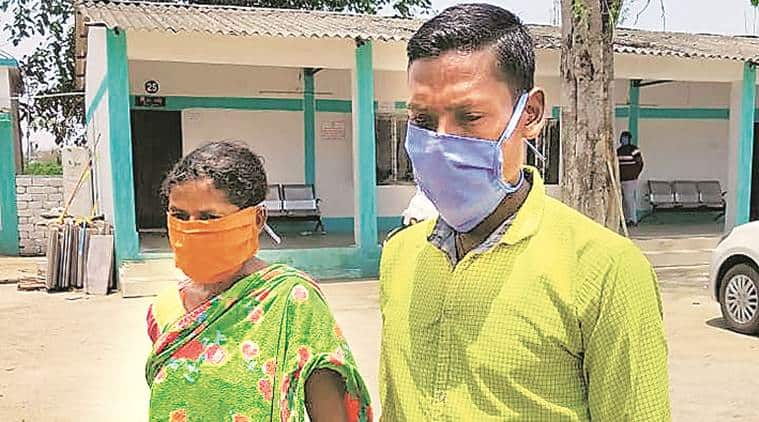 Jamalo Makdam’s parents Andoram and Sukamati. She left to work at a chilli farm in Telangana two months ago. (Express photo)

Jamalo Madkam, 12, left her house for the first time two months ago, going with some relatives and friends to work at a chilli farm in Telangana. On Sunday, she returned dead, trying to make her way back amidst the coronavirus lockdown.

Officials said the tribal girl died on April 18 due to electrolyte imbalance and exhaustion, having walked for over three days with 13 others, covering over 100 km and dying barely 11 km short of her home in Aded in Bijapur district of Chhattisgarh.

Jamalo was the only child of Andoram (32) and Sukamati Madkam (30), who barely survive on the forest produce they collect. It was the first time she had gone out to work. “She went to Telangana with some women from the village,” Andoram said. On Monday, Chief Minister Bhupesh Baghel announced  Rs 1 lakh for Jamalo’s family.

Many among Chhattisgarh’s tribal population go every year to farms in Telangana to earn money picking chillies.

Andoram said he last heard that Jamalo had left Peruru village in Telangana, where she worked, on April 16 with a group. “They decided to come back after realising that the lockdown had got extended and they would not get any work.”

The 13 with Jamalo included three children and eight women.

According to sources, Jamalo died around 8 am on April 18 when the group reached the border of Bijapur district of Chhattisgarh. The group could not inform the family as only one among them had a phone whose battery had died.

Finally, when the group reached Bhandarpal village in Bijapur district, they managed to call her parents. A resident of the village requesting anonymity said, “He asked if he could make a phone call to the girl’s village.”

Medical Officer of Bijapur district Dr B R Pujari said that when they got the news, they immediately rushed over. “Since Telangana had cases, we immediately sent our teams, but we couldn’t find them,” he said.

Chhattisgarh currently has 36 positive cases, of which 11 are in hospital. It is quarantining anyone arriving from outside the state. In Telangana, 872 positive cases have been reported.

Finally, a medical team from Bijapur managed to catch up with the group on the outskirts of Bhandarpal village. While Jamalo’s body was taken to a morgue, the group was sent into a quarantine facility.

On Sunday evening, Andoram and Sukamati arrived to take their daughter’s body.

Said Dr Pujari, “The girl is suspected to have died due to electrolyte imbalance and exhaustion, as the group had been walking three days. They walked through forests, and at one place, she also took a fall.”

The day after she died, Jamalo’s test results for coronavirus came. She was negative.