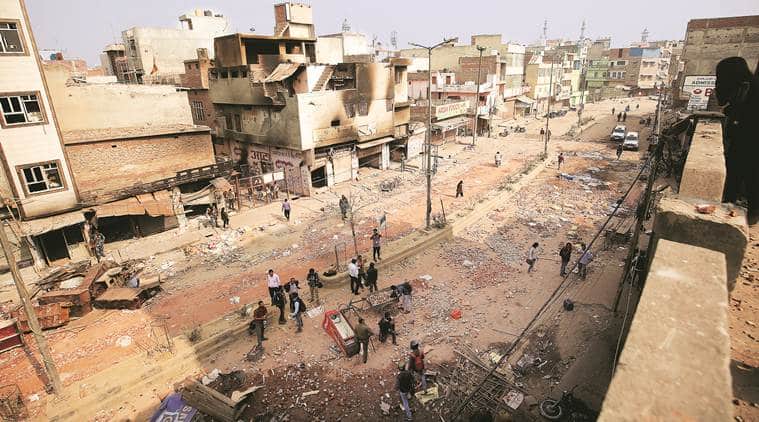 At Delhi’s Chand Bagh, one of the neighbourhoods that witnessed rioting. (Express photo: Praveen Khanna)

Indonesia on Saturday conveyed its concerns over the deadly riots in Delhi that were triggered by clashes over the Citizenship (Amendment) Act (CAA). On Sunday, Foreign Secretary Harsh Vardhan Shringla will travel to Bangladesh, the first high-level visit to that country since the CAA-NRC issue introduced strains in an otherwise robust bilateral relationship.

The Indonesian foreign ministry called in the Indian Ambassador to Jakarta, Pradeep Rawat, on Friday to discuss the riots that have claimed 42 lives so far, The Jakarta Post reported on Saturday.

“The Government of Indonesia has complete confidence that the Government of India will be able to manage the situation and ensure the harmonious relations among its religious communities. Moreover, both countries share similar characteristics, as pluralistic countries that uphold democratic values and tolerance,” the Indonesian foreign ministry said, according to the newspaper.

Shringla, who has earlier served as India’s High Commissioner to Bangladesh, will be in Dhaka on March 1-2 to meet the Bangladesh leadership. His main task will be related to laying the groundwork for Prime Minister Narendra Modi’s likely visit to Bangladesh for the birth centenary celebrations of Prime Minister Sheikh Hasina’s father and Bangladesh’s Father of the Nation Bangabandhu Sheikh Mujibur Rahman.

The event is expected to be held on March 17 — the Bangabandhu’s 100th birth anniversary — and is likely to be attended by, apart from Modi, former President Pranab Mukherjee and Congress president Sonia Gandhi.

In January this year, more than a month after the CAA was passed leading Bangladesh to cancel at least two ministerial visits to India, Prime Minister Hasina had said that while the CAA and NRC were “internal matters” of India, the CAA was “not necessary”.

In an interview to Gulf News in Abu Dhabi, she had said that she did not understand the purpose of the CAA, which offers a faster route to Indian citizenship for non-Muslim minorities who have faced persecution in Bangladesh, Pakistan, and Afghanistan.

“We don’t understand why [the Indian government] did it. It was not necessary,” Hasina said.

In December, Bangladesh’s Foreign Minister A K Abdul Momen and Home Minister Asaduzzaman Khan cancelled their visits to India after Parliament passed the CAA, sparking strong reactions in Dhaka. Both ministers cited scheduling commitments for not being able to visit.

Momen has said that the new citizenship law could weaken India’s secular character, and has rejected suggestions that minorities are facing religious persecution in his country. MEA spokesperson Raveesh Kumar had clarified at the time that there was no religious persecution under the “present government” of Bangladesh, but had happened under the “previous government” and “military rule”.

‘CAA derailed Congress plan to hit at govt on growth’