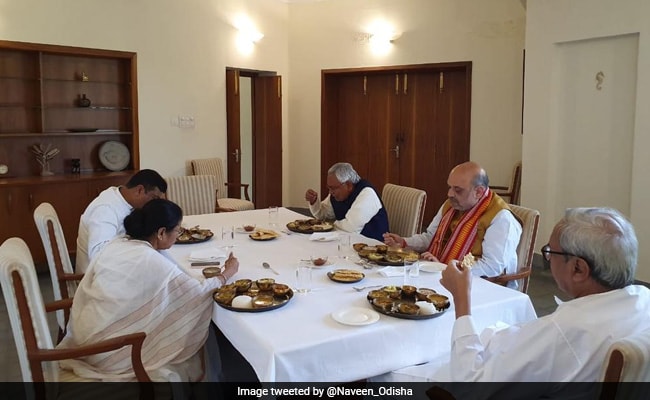 Naveen Patnaik hosted a lunch for members of the Eastern Zonal Council (EZC).

The two may rarely have a good word for each other in public but on Friday, Union Home Minister Amit Shah and West Bengal Chief Minister Mamata Banerjee were seen dining together courtesy Odisha Chief Minister Naveen Patnaik.

Ms Banerjee and Mr Shah had travelled to Bhubaneswar to attend a meeting of the Eastern Zonal Council (EZC), a forum of eastern states, chaired by the Home Minister. Mr Patnaik and his Bihar counterpart Nitish Kumar were also present while Jharkhand Chief Minister Hemant Soren could not make it.

Naveen Patnaik, the vice chairman of the EZC and host of its 24th meeting, tweeted a picture of the leaders dining at his home together.

According to news agency PTI, the EZC meeting discussed Left-wing extremism besides issues like coal-royalty revision, crimes and rail-link projects.

Mr Shah, who is on his first visit to Odisha since becoming home minister, also addressed a public rally in support of the controversial Citizenship Amendment Act (CAA).

The law, which has triggered deadly protests in the country, has been the main point of contention between Mamata Banerjee and the Union Home Minister in recent months.

Ms Banerjee has been one of the sharpest critics of the law, introduced in parliament personally by Mr Shah, and has vowed not to let it be implemented in West Bengal.

The Trinamool Congress chief has called the CAA deeply divisive and discriminatory. Making religion the test of Indian nationality for the first time, the law promises citizenship to non-Muslim refugees from Pakistan, Bangladesh and Afghanistan.

Mr Shah and the BJP government at the centre have maintained that the law only intends to help those who have faced religious persecution in the neighbouring countries.

However, Ms Banerjee’s party has alleged that combined with the proposed National Register of Citizens (NRC), the CAA can be used to target only Muslims who do not have the documents necessary to prove their citizenship.

At a rally in Kolkata last year, Amit Shah had launched a full-scale attack on Ms Banerjee, saying that that the centre will implement the NRC across the country and “no matter how much the Trinamool Congress opposes it, the BJP will get it done”.