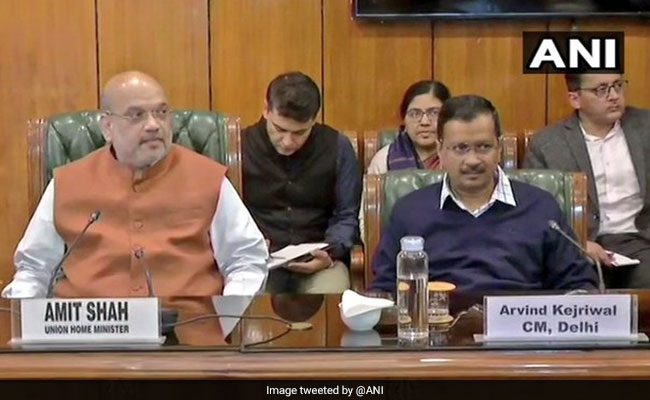 Union Home Minister Amit Shah met National Security Advisor Ajit Doval this evening and has met senior cops and officials, including Delhi Chief Minister Arvind Kejriwal, thrice in 24 hours since Monday evening, even as the death toll from the deadly violence continues to grow and incidents of violence over the controversial citizenship law continue to be reported.

The meeting between Mr Shah and Mr Doval came a few hours after the NSA visited violence-hit areas in northeast Delhi to review security and interact with residents. “Inshallah, there will be peace here,” he told reporters, shortly before he confronted by a girl who made an emotional appeal for help.

“I am a student, we can’t sleep at night, we are not fighting, I can’t go to study,” she said, to which Mr Doval asked her not to worry and trust the government and police.

Amit Shah, whose resignation has been demanded by Congress chief Sonia Gandhi, and to whose ministry Delhi Police reports, held a meeting at 6.30 pm on Tuesday that was attended by IPS officer SN Srivastava, who, only 30 minutes prior, had been appointed Special Police Commissioner to help the centre regain control of affected areas.

A second meeting took place at 1.30 pm on Tuesday; the Home Minister met with Mr Bhalla, Mr Kumar and others at North Block in central Delhi to evaluate the situation.

The meeting followed another held 90 minutes earlier, in which Mr Shah appealed to all parties to send their MPs, MLAs and leaders to affected areas to call for peace and eliminate the atmosphere of fear and rumours among the public.

“This situation can be dealt with only by rising above party politics,” Amit Shah said.

That meeting included Delhi Chief Minister Arvind Kejriwal and other leaders from the AAP, which is in power in the capital. After the meeting Mr Kejriwal said he had been assured of all possible support.

In addition to these three Mr Shah has been regularly meeting Home Ministry officials.

Amit Shah also met with senior officials at around 4 pm on Monday, a day after violence erupted in northeast Delhi’s Maujpur neighbourhood, where local BJP leader Kapil Mishra was caught on camera making a hate speech against anti-citizenship law protesters.

Directing Delhi Police to take strict measures, he then held a review meeting late that night.

Unrelenting violence has consumed northeast Delhi as groups for and against the controversial citizenship law clashed, leaving 27 dead, including a cop and an IB official, and over 200 injured.

Stone throwing, arson and vandalism have been reported as goons rampage through the streets armed with iron rods, sticks and guns. Smoke has been seen rising from multiple spots as buildings, shops and, in one instance, a petrol pump were set ablaze.

The Home Ministry earlier said the situation was under control, even as the number of deaths rose through the day. Ruling out deployment of Army to end violence, it had said enough police and paramilitary personnel were on the ground.

The ministry’s comment was in direct contradiction to that made by a senior cop, who claimed the top cop had told Mr Shah that “non-availability” of forces had led to the escalation of violence on Monday.