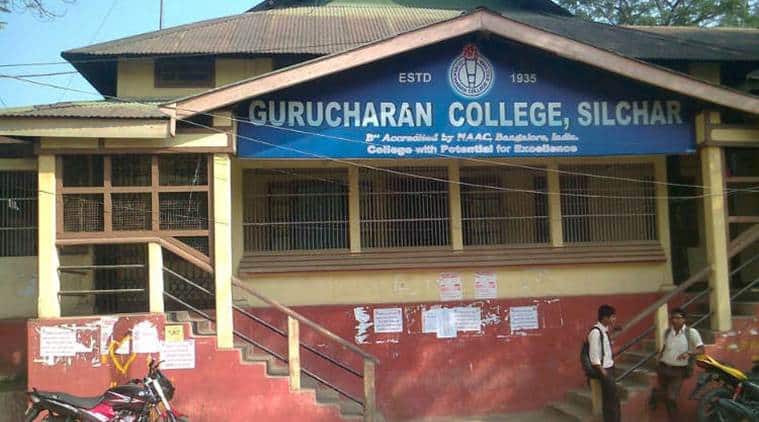 According to his family members, on Friday evening, a group of around 40 students gathered at their residence, demanding Sengupta apologise for his remarks. (Source: http://www.gurucharancollege.ac.in/)

A guest lecturer at Gurucharan College in Silchar, Assam, was arrested on Friday night following an FIR by 10 students accusing him of making inflammatory comments on Facebook.

While Souradeep Sengupta, 25, deleted his Facebook post after the students objected, police acted on the FIR to arrest him. Cachar SP Manabendra Dev Ray said Sengupta had been booked under the IPC and IT Act. “He was arrested due to anti-social comments on Facebook which may lead to communal tensions,” the officer said.

Sengputa’s bail plea came up before court on Saturday, and he was sent to judicial custody till Monday. Students are demanding that Sengupta be fired. Reached for a comment, Principal Bibhas Deb said Sengupta was not associated with Gurucharan College. “It was a temporary appointment and it (his contract) ended in November,” Deb added, refusing to comment further.

Sengputa, who had joined as guest lecturer at Gurucharan College a year ago, put up the Facebook post following the riots in Delhi, suggesting that some sections were trying to recreate the communal violence seen in 2002 in Gujarat.

Following a backlash, Sengupta deleted the post and said he was sorry. “I apologise for any religious sentiments I may have hurt by my posts. I made some irresponsible comments about a communally sensitive issue. It was a lapse of judgement. My intention was not to insult any religion at large,” he posted late Thursday night.

On Friday afternoon, some students filed an FIR and submitted a memorandum to Principal Deb, seeking Sengupta’s “immediate termination”. Rohit Chanda, 18, one of the complainants, said, “How can he, a teacher, insult our dharma?”

Sengupta’s family said on Friday evening, around 40 students gathered at their residence, demanding that Sengupta apologise for his remarks. Sengupta was not home at the time.

“The crowd demanded that Sengupta’s mother come out. She said they need to come in so that they could have a civil discussion. But once they did, the environment became very hostile,” a cousin of Sengupta’s said. “The crowd also accused his mother, who has been a government teacher for over 30 years, of not raising her son the right way. They even questioned her religious beliefs by making statements like, ‘What kind of Hindu are you if you don’t have a single idol, picture of Hindu god or goddess outside your portico?’.” It was around then that Sengupta came home and was immediately picked up by police, the cousin said.