India registered an increase of 768 coronavirus cases and 36 deaths in 24 hours on Saturday taking the tally to 7,529 and the toll to 242 while a consensus seem to emerge among states to extend the ongoing lockdown for another two weeks.

While the number of active COVID-19 cases stood at 6,634, as many as 652 people have been cured and discharged, and one had migrated, it said. The total number of cases include 71 foreign nationals.

However, according to, a PTI tally of figures reported by various states as on Saturday showed at least 8,016 cases and 261 deaths. 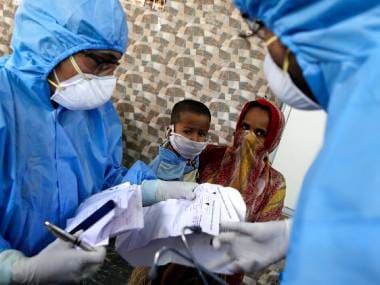 Doctors interact with people at a slum area in Mumbai during the lockdown. AP

The virus continued to spread further in Maharashtra, the worst-affected state in the country, now accounting for one-fifth of the total cases and nearly 46 percent of the 242 deaths in the country while numbers in Tamil Nadu surged to 969 and confirmed cases in the National Capital Delhi crossed the 1,000 mark.

A broad “consensus” on extending the lockdown emerged on Saturday during a meeting of chief ministers with Prime Minister Narendra Modi, indicating that restrictions may be tweaked as it was important to save livelihoods along with lives.

India is currently under a 21-day nationwide lockdown since 25 March. The current spell of the lockdown, billed as the world’s largest shutdown to check the spread of the infection, ends on Tuesday.

There were also indications that the extension in lockdown may come with certain relaxations to boost economic activities with sources saying that there were various proposals being considered, including lesser restrictions in areas unaffected by the virus spread.

The government officials said guidelines for the second phase of lockdown would be announced in next few days, even as Yediyurappa, after the interaction, said the extended lockdown period of two weeks would be different from the current 21-day spell.

“Talking about the Exit Plan from lockdown, the prime minister said that there seems to be a consensus amongst the states on extension of lockdown by another two weeks,” the official statement released after the meeting said.

Meanwhile, Maharashtra, West Bengal and Telangana announced extension of the lockdkown till 30 April. Punjab and Odisha have already announced extending the lockdown beyond 14 April .

On Saturday, Madhya Pradesh registered the maximum 17 deaths due to COVID-19, followed by 13 from Maharashtra, two each from Gujarat and Telengana, and one each from Delhi and Assam.

Of the total 242 deaths, Maharashtra tops the tally with 110 fatalities, followed by Madhya Pradesh at 33, Gujarat at 19 and Delhi at 14. Punjab registered 11 deaths, Telengana nine fatalities and Tamil Nadu eight.

Two deaths have been reported from Kerala. Bihar, Himachal Pradesh, Odisha, Jharkhand and Assam reported one fatality each, according to the health ministry data.

According to the ministry’s data updated in the evening, the highest number of confirmed cases in the country are from Maharashtra at 1,574, followed by Tamil Nadu at 911 and Delhi at 903.

The number of novel coronavirus cases have risen to 214 in Karnataka, 207 in Jammu and Kashmir and 177 in Haryana. Punjab has reported 132 COVID-19 positive cases so far and West Bengal 126.

Bihar has reported 60 cases while Odisha has 48 coronavirus cases. Thirty-five people were infected with the virus in Uttarakhand while Assam has 29 patients followed by Himachal Pradesh with 28 cases.

Chandigarh and Chhattisgarh have 18 cases each while Jharkhand has 17 and Ladakh 15, while 11 cases have been reported from the Andaman and Nicobar Islands.

Goa and Puducherry have reported seven COVID-19 infections each, Manipur and Tripura have two cases each while Mizoram and Arunachal Pradesh have reported one case each.

These numbers, however, don’t reflect those reported by state officials, as it takes time to update figures to the national database maintained by the Ministry of Health and Family Welfare.

Maharashtra tops tally among states as toll rises to 127

Based on figures released by state officials, Maharashtra’s tally of COVID-19 cases reached 1,761 on Saturday with 187 new patients being reported positive.

A state health department statement also said that 17 coronavirus patients died during the day, including 12 in Mumbai. With this the death toll due to COVID-19 in the state rose to 127.

Of 17 patients who died on Saturday, 16 were also suffering from other ailments such as diabetes, high BP, asthma and heart disease.

As many as 36,771 persons have been tested in the state so far while 38,800 persons are in home quarantine and 4,964 in institutional quarantine. As many as 208 patients recovered and were discharged from hospitals.

Meanwhile, state health Minister Rajesh Tope said on Saturday that Mumbai, Navi Mumbai, Thane, Palghar, and Pune will fall under the “red zone” as they have reported 91 percent of the total positive cases in Maharashtra. Tope made the announcement soon after Thackeray extended the lockdown period in the state till April 30.

The situation though not as grim as Maharashtra, the number of cases in the National Capital mounted to 1,069, the second highest in the country, with 166 fresh cases and five deaths being reported on Saturday, according to Delhi government authorities.

Of the total cases, 712 are those who have been brought to facilities through special operations.

Government authorities had last month carried out measures to quarantine people who were related to the religious congregation that took place in Nizamuddin area in March. By Friday night, the number of cases of the deadly virus in the city stood at 903 including 14 deaths.

With five more fatalities reported, the death toll from COVID-19 in Delhi has risen to 19. Out of the total cases, 26 have been discharged and one has migrated out of the country, authorities said.

Tamil Nadu reported 58 fresh coronavirus cases and one death on Saturday, taking the tally to 969 and the toll from the virus to 10.

Rajasthan recorded 117 new cases of coronavirus on Saturday, taking the tally in the state to 678, an official said.

The virus has so far claimed eight lives in the state. Jaipur has reported the highest number of coronavirus cases in the state at 286.

Rajasthan is under a lockdown from March 22, three days before the nationwide one was enforced, while large-scale survey and screening is underway to trace the contagion.

Red, orange, green zones may come up during extended lockdown

According to PTI, the Centre is likely to categorise the country into red, orange and green zones depending on the number of COVID-19 cases during the proposed extended period of lockdown and might allow limited services to function in the safe zones.

There will be no activity in the red zones — the districts where sizeable number of cases were detected or areas which were declared hotspots, the news agency said.

In the orange zones — where only a few cases were found in the past with no increase in the number of positive cases — minimum activities like opening of limited public transport, harvesting of farm products will be allowed.

Green zones will be in the districts where there is no COVID-19 case.

According to PTI, the Indian Council of Medical Research has still not received the  five lakh antibody testing kits it had ordered to conduct rapid testing in coronavirus hotspots.

“Five lakh antibody testing kits ordered by the ICMR have not been received yet,” said Raman R Gangakhedkar, head of epidemiology and Communicable diseases at ICMR.

Elaborating on tests for the virus at the daily brieifing, Gangakhedkar said that over 1.7 lakh samples have been tested for COVID-19 in the country so far, of which 16,564 were tested on Friday.

Out of these 16,564 samples, 14,210 were tested in 146 government laboratories under the ICMR network and the remaining at 67 private labs.

Joint Secretary in the Health Ministry Lav Agarwal elaborated on India’s preparedness to deal with the challenge of the virus, saying 586 hospitals have been earmarked as dedicated COVID-19 facilities at state and Central level with capacity of over one lakh isolation beds and 11,836 ICU beds reserved for such patients.

“This figure is being augmented every day, based on the evolving situation,” he said.

Agarwal also asserted that the country has no shortage of anti-malarial drug hydroxychloroquine, cited by many as a viable therapeutic solution to counter the coronavirus infection.