The total confirmed cases of coronavirus (COVID-19) in India stood at six on Tuesday after an Italian tourist tested positive for the novel virus in Jaipur, and authorities like Prime Minister Narendra Modi and several state governments doubled down on facilities to treat patients and precautionary measures. The disease has now spread to over 60 countries and has claimed over 3,100 lives worldwide, PTI reported.

The report said that the sample of the Italian tourist, which was sent to National Institute of Virology in Pune, was found to be positive after the first two tests gave contradictory results. The 69-year-old man, part of a group of 20 tourists, is admitted at an isolation ward of the SMS Hospital. His wife also tested positive for the virus, PTI reported, however, the Rajasthan government said that her sample is being sent to the National Institute of Virology in Pune for another test.

Rajasthan health minister Dr Raghu Sharma on Tuesday instructed health officials to screen all those people who had come in contact with the Italian tourist who tested positive for coronavirus.

Asking to step up vigil, the minister also asked officials to send a rapid response team of the Medical Education and Health Department to the places visited by the patient, along with 19 others from Italy. The team, including senior professors and epidemiologists, will inspect hotels and excursions in Jaipur, Udaipur, Jodhpur, Bikaner, Mandawa (Jhunjhunu) and Jaisalmer.

Meanwhile, the Centre on Tuesday extended the suspension of existing visas given to nationals from Italy, Iran, South Korea, and Japan on or before 3 March and who have not yet arrived in India. The move came a month after India cancelled the visas for Chinese nationals and those who had visited China in January, after the outbreak of the disease in December. Over 90,000 have been infected globally so far.

As country records three new #COVID19 cases in two days, here are the symptoms one should watch out for: pic.twitter.com/V2zajZSes9

Two private schools in Noida shut on Tuesday till 6 and 9 March, respectively, and several people, including family members of a Delhi man who tested positive for the virus, were quarantined or kept in isolation. 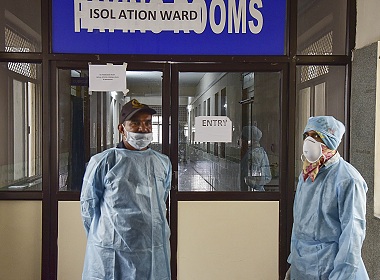 Medics outside an isolation ward of coronavirus at Gandhi Hospital in Hyderabad. PTI

One of the schools in Noida, on the outskirts of Delhi, where the Delhi man’s son is a primary class student, said it will remain shut from 4 to 6 March, while the other said it will be closed till Saturday. The board exams are not affected, the messages sent by the schools to the parents made clear.

It came to light that the man had thrown a birthday party last week for the child, triggering fears that those who attended it including some students and his relatives might be at risk.

While some family members of the man, an accountant, and others who came in contact with him were asked to remain quarantined at their homes in Delhi and Agra, six others from Agra with “high-viral load” have been kept in isolation at Safdarjung Hospital in Delhi and their samples have been sent to NIV, Pune, officials said.

Sources said the patient from Mayur Vihar in Delhi, who had travelled to Italy recently, was shifted to a quarantine ward at Safdarjung Hospital on Sunday night.

Meanwhile, in Lucknow, samples of an Uttar Pradesh resident who had returned from Saudi Arabia on Tuesday morning have been sent for testing. He will be quarantined for 14 days in the hospital, according to Chief Medical Officer Dr Narendra Agarwal.

The condition of a 24-year-old Bengaluru-based techie, who tested positive for the novel coronavirus in Hyderabad, is stable and the process of tracking people he came in contact with was on, Telangana health minister E Rajender said on Tuesday.

“The health condition of the man, who works in Bengaluru as a software professional, has, in fact, shown improvement since Monday,” he said. Admitted to an isolation ward in the state-run Gandhi hospital, the man is found to have come in contact with 88 people. Rajender said of these, 45 had been brought to the hospital and their test results are awaited.

The minister spoke to reporters after a meeting of the cabinet sub-committee where measures to be taken to prevent the spread of the virus following detection of the positive case were discussed. The meeting was attended by other members of the cabinet sub-committee, state municipal administration minister KT Rama Rao and panchayati raj minister E Dayakar Rao, along with senior officials.

Rajender also said the state government has set up isolation wards in five government hospitals and has identified altogether 3,000 beds, including 2,000 in different private medical colleges. The minister said he spoke to Union Health Minister Harsh Vardhan and Central officials and sought supply of masks which was accepted.

Passengers who were with him on the flight from Dubai were also being contacted, even as people who worked with the techie have been asked to work from home. The software engineer had been to Dubai last month on an official visit, where he is suspected to have contracted the virus.

He then travelled to Hyderabad after staying in Bengaluru for a couple of days. He had developed fever thereafter, contacted doctors there and tested postive for the infection, Sriramulu said.

A total of 23 people who travelled with him and his roommates have been screened and tests are being conducted as a precautionary measure, sources said.

As concerns over the spread of the virus mounted after reports of the two new cases of COVID-19 were reported from India on Monday, Prime Minister Narendra Modi held a review on Tuesday on the preparedness.

Urging people not to panic and instead take basic protective measures, Modi also released a helpline number (+911123978046) and email id (ncov2019@gmail.com) to report any suspected cases.

Taking to Twitter, Modi wrote, “There is no need to panic. We need to work together, take small yet important measures to ensure self-protection.”

There is no need to panic. We need to work together, take small yet important measures to ensure self-protection. pic.twitter.com/sRRPQlMdtr

“Had an extensive review regarding preparedness on the COVID-19 Novel Coronavirus. Different ministries and states are working together, from screening people arriving in India to providing prompt medical attention,” he said in another tweet.

The Civil Aviation Ministry too conducted a meeting with all airports to review and update guidelines. Contact tracing of the people who came in contact with the six is simultaneously being done through the Integrated Disease Surveillance Program (IDSP) network, the Health Ministry said in a statement.

The AAP government said Tuesday it is taking all steps to contain the spread of the virus and earmarked 230 beds in isolation wards being set up at 25 hospitals, as several city schools sent advisories to parents listing precautionary measures.

Delhi chief minister Arvind Kejriwal held an emergency meeting with state health minister Satyendar Jain and other top officials and took stock of government preparations to contain the virus. Deputy Chief Minister Manish Sisodia said the Delhi government was trying to get in touch with people who could be infected or were in contact with the man infected with the virus.

The Delhi health minister said 3.5 lakh N95 masks were being arranged and the government has 8,000 separation kits for staff treating coronavirus patients. “COVID-19 is a new infection, but there is no need to panic,” Jain told reporters after the meeting, flanked by Sisodia.

“We are taking all possible steps to keep Delhi safe. Isolation wards are being readied in 25 hospitals, including 19 government and six private hospitals. 230 beds have been earmarked for coronavirus patients,” he said.

The Indian Navy on Tuesday postponed a multi-nation mega naval exercise ‘Milan 2020’ which was scheduled to be held off the coast of Visakhapatnam as part of precautionary measures against coronavirus infection. The Milan naval exercise was scheduled to be held between 18 and 28 March and over 40 countries were expected to participate in the exercise.

The exercise has been postponed taking into consideration the “safety of all participants and travel restrictions imposed due to the spread of COVID-19”, officials said.

The Milan 2020 had generated a very enthusiastic response, with navies around the world having expressed desire to participate, they said, adding the Indian Navy looks forward to schedule the exercise at a later convenient date. 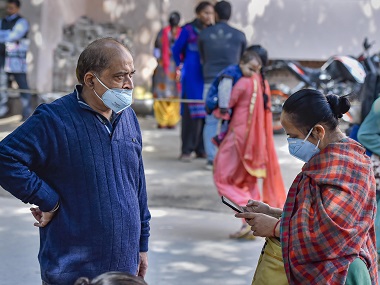 The Union Health Ministry said that while visa restrictions on Italy, Iran, South Korea, and Japan, besides China, will continue, it exempted diplomats, officials of UN and other International bodies, OCI cardholders and aircrew from it on entry. However, their medical screening is compulsory, it said.

“Passengers of all international flights entering into India from any port are required to furnish duly filled self-declaration form (including personal particulars, ie, phone number and address in India) and travel history, to health officials and immigration officials at all ports.

The ministry said that all previous advisories stand superseded in view of the fresh instructions.

It asked all Indian citizens to refrain from travel to China, Iran, South Korea, Italy and asked them to avoid non-essential travel to other COVID-19 affected countries.

The government has asked people to avoid non-essential travel to Iran, Italy, South Korea and Singapore and said India was in discussions with authorities in Iran and Italy, two countries badly affected by the infection, to evacuate Indians there.

India had earlier reported three cases from Kerala, including two medical students from Wuhan in China, the epicentre of the deadly novel coronavirus. All the three have recovered.

The DGCA on Tuesday asked airlines and airports to take specific measures such as providing protective gears like surgical masks and gloves to crew members and passengers and having multiple hand sanitising points in terminals.

The aviation regulator stated that airports and airlines must ensure that each aircraft arriving from South Korea, Japan and Italy is subjected to disinfection process before the boarding begins for the next flight on the plane.

“All ground handling staff entering inbound and outbound international flights shall be provided with personnel protective equipments (PPEs) and such PPEs shall be disposed of in an appropriate manner after each flight,” the DGCA circular said.