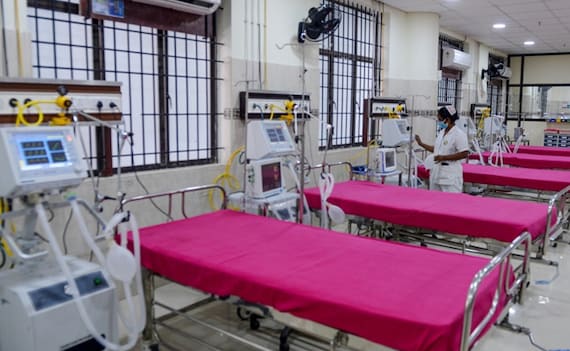 The doubling rate of COVID-19 cases in India has dropped to 6.2 days over the past week, as compared to three days before the lockdown was imposed last month, the government said today, adding that there had been a 40 per cent decline in the growth of new cases. The decline is the result of increased testing, including that of patients suffering from SARI (severe acute respiratory illness) and ILI (influenza-like illness), the government added.

The doubling rate of COVID-19 cases in India has dropped to 6.2 days over the past week, as compared to three days before the lockdown was imposed last month, the government said today, adding that there had been a 40 per cent decline in the growth of new cases.

“Before the lockdown, doubling rate of COVID19 cases was about three days, but according to data in the past seven days, the doubling rate of cases now stands at 6.2 days,” Lav Aggarwal, a senior Health Ministry official, told reporters during a daily briefing.

Mr Aggarwal also said the rate – the days it takes for the number of novel coronavirus cases to double – in 19 states and union territories was even lower than the national average. These include Kerala (which made the case for an extended isolation period) Delhi, Tamil Nadu, Andhra Pradesh and UP, which are among the worst-hit states in the country.

The government also said recovery rates had improved. The ratio between recovered COVID-19 patients and deaths stands at 80:20, which is higher than several other countries, health ministry officials added.

Internal government assessments had suggested the number of COVID-19 cases in the country could peak in the first week of May, after which it will decline. Sources told NDTV the next week could be crucial, a point highlighted by an increase in testing.

This increased testing will include SARI patients, a senior officer told NDTV; last week the ICMR (Indian Council for Medical Research, the government’s nodal body in this crisis) conducted random coronavirus tests on SARI patients and found that more and more people, with no travel or contact history, are testing positive for COVID-19.

The emphasis on increased testing for coronavirus patients comes amid criticism by Congress leader Rahul Gandhi, who yesterday cautioned the government that a lockdown alone couldn’t stop the virus from spreading and aggressive testing was needed.

“In no way does a lockdown defeat the virus. It helps only to stop it for a short while. The only way to do this is to increase testing,” he said, adding that testing levels were “too low”.

ICMR scientist Dr Raman R Gangakhedkar hit back, pointing out that countries with higher testing rates had significantly smaller population sizes and India was, at present, conducting 24 tests from which one returned positive.

Prime Minister Narendra Modi’s lockdown – initiated last month and extended to May 3 this week – has also been credited with cutting down the cases. The centre had earlier said that had it not been enforced 8.2 lakh people could have been infected by April 15.

India has reported over 13,000 novel coronavirus cases so far, with 437 deaths linked to the virus. Worldwide COVID-19 has infected over 21.5 lakh and killed 1.44 more.