A medical professional offers aide to a patient outside Delhi’s AIIMS.

The Health Ministry has announced that 78 districts, from at least 429 where cases have been reported so far, have recorded no new infection over the last 14 days. Of these, it said, 12 districts reported no new cases in the last 28 days.

At the media, C K Mishra, environment secretary who heads the empowered group on medical infrastructure, made a global comparison of where countries stood by the time they had conducted 5 lakh tests. 78 districts, from at least 429 where cases have been reported so far, have recorded no new infection over the last 14 days.

“If we make a comparison, we seem to be doing well with our strategy, which is intensely focussed on areas of high positivity — of course, countries like South Korea have done better. This shows that our testing strategy has been targeted and continues to expand. It’s an evolving strategy, we are learning every day and as we are learning we are expanding…we will expand it again in future as the scale of the challenge keeps changing,” Mishra said.

According to the Ministry, the list of 12 districts that did not report a fresh case in the last 28 days or more, include eight new ones: Chitradurga (Karnataka), Bilaspur (Chhattisgarh), Imphal West (Manipur), Aizawl West (Mizoram), Bhadradari Kothagudem (Telangana), Pilibhit (UP), SBS Nagar (Punjab) & South Goa (Goa).

A low-cost method of testing coronavirus or COVID-19 developed by researchers at the Indian Institute of Technology (IIT), Delhi, has been approved by the Indian Council of Medical Research (ICMR). According to a press release from the institute, the COVID-19 detection assay was developed by a research team from IIT-Delhi’s Kusuma School of Biological Sciences (KSBS). 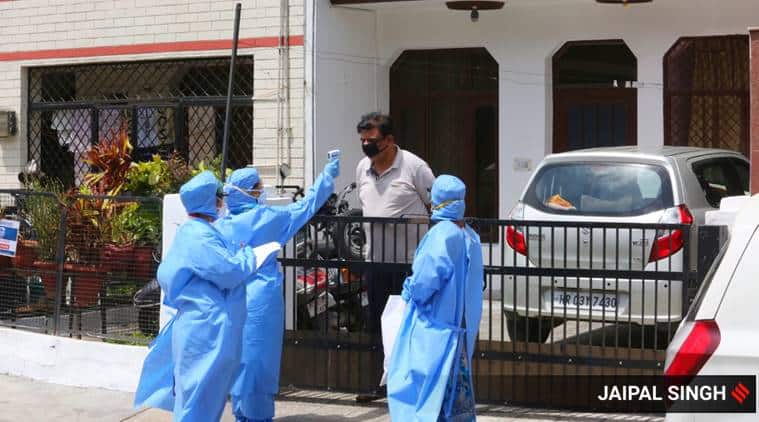 This makes IIT-Delhi the first academic institute to have obtained ICMR approval for a real-time PCR-based diagnostic assay.

The institute claims “the assay was validated with a sensitivity and specificity of 100 per cent”. This makes IIT-Delhi the first academic institute to have obtained ICMR approval for a real-time PCR-based diagnostic assay.

A group of 101 retired civil servants have written an open letter to Chief Ministers of all states and Lieutenant Governors of all Union Territories against reports of harassment of Muslims in some parts of the country after coronavirus cases were linked to the Tablighi Jamaat congregation in New Delhi’s Nizamuddin area.

“The Jamaat was criticised for ignoring the principles of social distancing when cases of Covid-19 had started emerging in the country. Although this was hardly the only incident of such gatherings, both political and religious, sections of the media hastened to give a communal colour to Covid-19, including attributing motives to the Tablighi Jamaat in spreading the virus to different parts of the country,” the group, under the banner of the Constitutional Conduct Group, said in the letter written Thursday.

Don’t miss these articles on Coronavirus from the Explained section:

‣ Mask or no mask? Why the guidance has been shifting

‣ Besides a face cover, should I wear gloves when I go outdoors?

‣ Can coronavirus damage your brain?

Without lockdown there would have been estimated 1 lakh Covid-19 cases; 9.45 lakh under surveillance: Govt