Coronavirus Outbreak LATEST Updates: Civic authorities have ordered sealing of borders of the Kalyan and Dombivali cities in Maharashtra with immediate effect to check the spread of coronavirus.

Arvind Kejriwal briefed the media about his 5-step programme to curb the pandemic in the National Capital on Tuesday. ‘We have to stay three steps ahead of the coronavirus. Hence, we have decided to implement a five-step plan to tackle the outbreak in Delhi’.

WhatsApp is set to impose a strict new limit on message forwarding as the Facebook-owned chat app seeks to slow the dissemination of fake news, the company has announced on Tuesday. WhatsApp is to limit sharing of frequently forwarded messages to only one chat at a time.

In view of the humanitarian aspects of COVID-19 pandemic, the Ministry of External Affairs (MEA) on Tuesday announced that India has decided to license Paracetamol and Hydroxychloroquine in appropriate quantities to all its neighbouring countries which are dependent on its capabilities.

Two more cases of the novel coronavirus disease have been found in the Dharavi area of Mumbai, Maharashtra. The cases have been reported in Dr Baliga Nagar. They are the father, 80, and brother, 49, of the second case from the area as total cases in Dharavi stand at four.

As many as 1,182 people have been arrested and 504 cases registered so far in Assam for not following the lockdown restrictions imposed in view of the coronavirus outbreak, an official said.

Amid rising global pressure to allow exports of anti-malarial drug hydroxychloroquine and paracetamol which is being tested on patients infected with coronavirus, the government is likely to clear the move after calculating sufficient stocks for the country, say reports.

US President Donald Trump on Tuesday hinted at a possible retaliation if India does not lift its hold on the export of Hydroxychloroquine, the anti-malaria drug used in the treatment of coronavirus patients.

While India has lifted restrictions on the export of 24 pharmaceutical ingredients and medicines made from them, it is not clear what prompted the move. However, Reuters has quoted Indian government sources as saying that the bans had prompted intense pressure from the United States.

The Union government on Monday said that there has been an increase of 704 COVID-19 cases taking the total number to 4,067 in the last 24 hours, the biggest rise so far in India.

Further, 28 deaths have been reported in the past 24 hours. With this, the total number of deaths in the country has crossed the 100-mark.

Meanwhile, Prime Minister Narendra Modi interacted with Union ministers through video conferencing, and asked them to prepare a list of ten major decisions and ‘ten priority areas of focus’ once the lockdown ends. Modi said that Central ministries should prepare a business continuity plan and asked all departments to maintain an objective index on how their work will promote ‘Make in India.’ 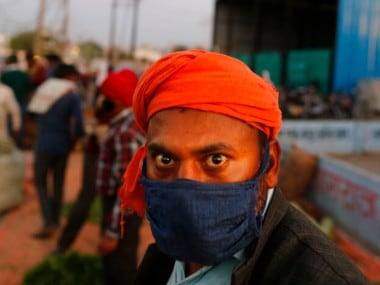 The Cabinet has approved an ordinance amending the Salary, Allowances and Pension of Members of Parliament Act, 1954, which will result in the reduction of allowances and pension of the politicians by 30 percent from 1 April, 2020 for a year.

The number of coronavirus cases in Maharashtra rose to 781, with 33 people more people testing positive for the disease on Monday, a health official said.

Among the new cases, 19 were reported from Pune city, 11 from Mumbai and one each from Satara, Ahmednagar and Vasai (in Palghar district), said the official.

“The state health department on Monday received reports of 33 people testing positive for coronavirus. With this, the state tally increased to 781, he said.

The state has so far reported 45 deaths due to the viral disease.

Gujarat reported 16 new coronavirus cases, taking the total number of such cases in the state to 144, a health department official said.

Of the 16 new cases, 11 are from Ahmedabad, two from Vadodara, and one each in Mehsana, Patan and Surat.

Tamil Nadu health secretary Beela Rajesh said that 50 new COVID-19 positive cases have been reported in the state on Monday, taking the total cases to 621. 48 of the new cases are connected to the Tablighi Jamaat event in Delhi, 570 of the total COVID-19 cases are Tablighi Jamaat returnees.

The Karnataka government said that as of 5 pm on Monday, 12 new coronavirus cases were reported in the last 24 hours, taking the total number of positive cases to 163 in the state. Additionally, the state has reported four deaths while 20 people have recovered.

The health bulletin said that the government is still trying to get details of whether the COVID-19 cases in Mysuru with travel history to Delhi are connected to the Tablighi Jamaat event, adding that one of the 12 new cases from Bangalore Rural attended the event and returned on 20 March.

In Delhi, cases of coronavirus rose to 532 after 20 new cases were reported in the last 24 hours, Chief Minister Arvind Kejriwal said. Of the new cases, 10 are attendees of the Tablighi Jamaat congregation in the Nizammudin area of the National Capital.

Additionally, he said one patient had died in the last 24 hours and 25 others are on ventilators. The total number of deaths is at 7 now.

The Delhi Police shifted 17 pregnant women to different hospitals in the national capital amid the lockdown imposed to combat the coronavirus threat, officials said on Sunday.

“The PCR vehicles of Delhi Police shifted as many as 17 women, who were in labour, to various hospitals in the city,” Deputy Commissioner of Police (PCR) Sharat Kumar Sinha said.

In Bengaluru, the South Western Railways said that a 50-bedded hospital for COVID-19, with six ICU beds, has become fully operational at Divisional Railway Hospital.

In Goa, the fisheries department has decided to allow sale of fish in the state from Monday, with certain riders, including strict implementation of social distancing guidelines the curb the spread of coronavirus.

Fish is a key kitchen staple of people in the coastal state and its sale was banned since the enforcement of lockdown last month.

Goa Fisheries Minister Philip Neri Rodrigues told PTI that the stock of fish caught before the imposition of ban is lying at different cold storages in the state.

However, the traditional fish markets will continue to be closed to contain the spread of coronavirus, he said, adding that they are trying to work out modalities on how to allow people to buy fish without the markets being opened.

The number of the coronavirus cases in Pakistan reached 3,277 with the infections in the worst-hit Punjab province approaching 1,500 despite government claims that the ongoing lockdown in the country has slowed down the spread of the deadly virus.

Ministry of National Health Services said that 50 patients have so far died of the disease, while 257 people have recovered.

Japanese Prime Minister Shinzo Abe said that he will declare a state of emergency for Tokyo and six other prefectures as early as Tuesday to bolster measures to fight the coronavirus, but that there will be no hard lockdowns.

Abe also told reporters Monday that his government will launch a 108 trillion yen ($1 trillion) stimulus package — Japan’s largest ever and nearly twice as much as expected — to help counter the economic impact of the pandemic, including cash payouts to households in need and financial support to protect businesses and jobs.

Abe said experts on a government-commissioned task force urged him to prepare to declare a state of emergency, with the COVID-19 outbreak rapidly expanding in major cities including Tokyo, and hospitals and medical staff overburdened with patients. He said the state of emergency will cover Tokyo, Osaka, Fukuoka and four other hard-hit prefectures, and will be in effect for about a month.