India’s coronavirus cases rose to 21,700 with 1,229 fresh cases, and the overall toll neared 700 with 34 new deaths on Thursday. The Union health ministry, meanwhile, said that it has been able to “cut coronavirus transmission”, minimise its spread and increase the doubling time of cases in the duration of the nationwide lockdown.

The number of active COVID-19 cases stood at 16,689 as 4,324 people were cured and discharged, and one patient migrated, the ministry said. Thus, about 19.93 percent of the cases have recovered so far. The total number of cases include 77 foreign nationals.

AIIMS director Randeep Guleria on Thursday said that it was “important to reach out to patients who are missing out of treatment because of the stigma and panic”, adding, “It is important to encourage more and more people to get tested, get treated.”

“…It (stigma) is actually causing increase in morbidity and mortality. Because of the stigma that is happening many patients who have COVID-19 or flu like symptoms are not coming to health care facilities,” he added. 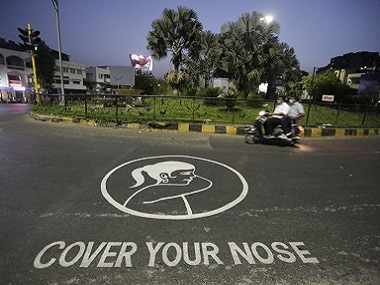 He also said that at various centres, “we’ve started using convalescent plasma that is the blood of COVID-19 patients who have recovered. A large number of patients who have become alright have come forward and volunteered to donate their blood.”

Centre says no exponential growth in COVID-19 cases so far

In its press briefing on Thursday, the Union health ministry asserted that the growth of coronavirus cases in the country has been more or less linear and not exponential, and added that testing has been ramped up consistently.

CK Mishra, the chairman of Empowered Group Two, said, “One crucial weapon we employed during the 30-day lockdown period is RT-PCR test to ascertain if one has contracted the disease or not.”

As on 23 March, nearly 15,000 tests were done across the country and by 22 April more than 5 lakh tests were conducted, which is about “33 times in 30 days”, he said, adding, “But we are conscious of the fact that this is not enough and we have to continuously ramp up testing in the country and we will do that.”

Of the empowered groups formed to suggest measures to ramp up healthcare, put the economy back on track and reduce misery of people once the lockdown is lifted, Mishra is the chairman of Empowered Group Two tasked with coordinating availability of hospitals, isolation and quarantine facilities, disease surveillance, testing and critical care training.

“The growth of COVID-19 cases has been more or less linear, not exponential; this indicates that the strategies we adopted have succeeded in containing the infection to a particular level. Post imposition of lockdown, while the number of new positive cases has increased by 16 times, testing increased by 24 times,” Mishra said in his presentation.

Mishra also said that in the last month, the number of dedicated hospitals for treating coronavirus patients has been increased 3.5 times and the number of isolation beds rose by 3.6 times.

Mishra also claimed that India has done better than a majority of developed countries with respect to the percentage of test cases yielding positive results.

Coronavirus cases have spiked in Gujarat, and the rising infections in the state have become a new cause for major concern. Just five days ago, Gujarat was at number six, with Delhi, Rajasthan, Tamil Nadu and Madhya Pradesh — apart from Maharashtra — having more confirmed cases.

A total of 34 deaths were reported since Wednesday evening of which 18 fatalities were reported from Maharashtra, eight from Gujarat, three from Andhra Pradesh, two from Rajasthan and one each from Delhi, Telengana and Madhya Pradesh.

Of the 686 deaths, Maharashtra tops the tally with 269 fatalities, followed by Gujarat at 103, Madhya Pradesh at 81, Delhi at 48, Rajasthan and Andhra Pradesh at 27 each and Telengana at 24.

The death toll reached 21 in Uttar Pradesh, 18 in Tamil Nadu while Karantaka has reported 17 cases. Punjab has registered 16 deaths while West Bengal has reported 15 fatalities. The disease has claimed five lives in Jammu and Kashmir, while Kerala, Jharkhand and Haryana have recorded three COVID-19 deaths each.

Bihar has reported two deaths, while Meghalaya, Himachal Pradesh, Odisha and Assam have reported one fatality each, according to the ministry data.

However, a PTI tally of the figures reported by various states as on Thursday showed 21,673 cases and 689 deaths in the country.

There has been a lag in the Union Health Ministry figures, compared to the number of deaths announced by different states, which officials attribute to procedural delays in assigning the cases to individual states.

Bihar has reported 148 coronavirus cases, while Odisha has 83 cases. Forty-nine people have been infected with the virus in Jharkhand and 46 in Uttarakhand. Himachal Pradesh has 40 cases, Chhattisgarh has 36, while Assam has registered 35 infections so far.

Chandigarh has 27 COVID-19 cases, Ladakh 18, while 17 cases have been reported from the Andaman and Nicobar Islands. Meghalaya has reported 12 cases, and Goa and Puducherry have seven COVID-19 cases each. Manipur and Tripura have two cases each, while Mizoram and Arunachal Pradesh have reported a case each.

“Our figures are being reconciled with the ICMR,” the ministry said on its website. States wise distribution is subject to further verification and reconciliation, it said.

Maharashtra chief minister Uddhav Thackeray on Thursday said that his government’s focus was to reduce the mortality rate of COVID-19 patients and increase the period during which the number of positive cases double.

He made the remarks during his video-conference interaction with the members of two central teams that toured Mumbai and Pune cities, the two coronavirus hotspots in the state.

The teams took a review of the medical machinery, implementation of the lockdown measures and social distancing, safety of health workers and situation of labourers in shelter camps, supply of essential goods, among other things.

A statement issued by the Chief Minister’s Office (CMO) said that Thackeray told the teams that reducing the mortality rate of COVID-19 patients and increasing the period of doubling of positive cases were his government’s focus.

At present, the period of doubling of patients in the state is seven days, which has to be increased to more than 10 days, Thackeray told the teams. He asked the state administration to take into consideration all the suggestions made by the central teams.

US sees record levels of unemployment

Unemployment in the US swelled to levels last seen during the Great Depression of the 1930s, with one in six American workers thrown out of a job because of the coronavirus.

In all, roughly 26 million people — more than the population of the six biggest US cities combined — have now filed for jobless aid in five weeks, an epic collapse that has raised the stakes in the debate over how and when to lift the state-ordered stay-at-home restrictions that have closed factories and other businesses from coast to coast.

Meanwhile, some countries — including Greece, Bangladesh and Malaysia — announced extensions of their lockdowns. Vietnam, New Zealand and Croatia were among those moving to end or ease such measures.

In Africa, COVID-19 cases rose 43 percent in the past week, up from 16,000 to 26,000 cases, according to John Nkengasong, director of the Africa Centers for Disease Control and Prevention. The figures underscored a recent warning from the World Health Organization that the virus could kill more than 3,00,000 people in Africa and push 30 million into desperate poverty.

Huge lines have formed at food banks from El Paso, Texas, to the Paris suburbs, and food shortages are hitting Africa especially hard.

The European Union has pledged 20 billion euros to help vulnerable communities globally. EU leaders scheduled a virtual summit on Thursday to take stock of the damage the crisis has inflicted on the bloc’s own citizens and to work out an economic rescue plan.

The coronavirus has killed over 1,84,000 people worldwide, including about 47,000 in the United States, according to a tally compiled by John Hopkins University from official government figures. The true numbers are almost certainly far higher.

Coronavirus growth in India linear, not exponential, much better than US, UK, says govt