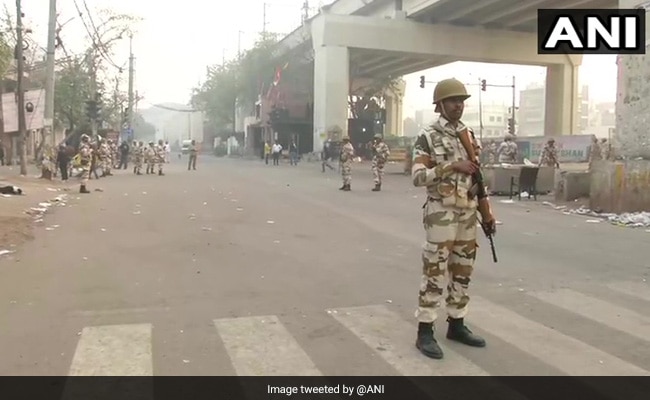 Delhi Violence: US has urged India to “protect and respect” right to peaceful assembly

The US has urged India to “protect and respect” the right to peaceful assembly of people and hold accountable those perpetrating violence following the Delhi clashes over the amended citizenship act, saying that Washington has raised the issue at the highest level with New Delhi.

The Comments came after Delhi this week witnessed the worst clashes in three decades, killing 39 people and injuring over 200 others. The communal clashes began in northeast Delhi over the Citizenship Amendment Act (CAA) and spiralled into bloodshed.

The Parliament had passed CAA last year, resulting in a series of protests across the country.

According to the CAA, religious minorities – Hindu, Sikh, Buddhist, Jain, Parsi and Christian communities – who have faced religious persecution in Pakistan, Bangladesh and Afghanistan and took refuge in India till December 31, 2014 are eligible to get Indian citizenship.

The Indian government has been emphasising that the new law will not deny citizenship rights to any existing citizen, in fact, it has been brought to protect the oppressed religious minorities of neighbouring countries and give them citizenship.

“We strongly condemn the recent violence and urge authorities to protect and respect the right of peaceful assembly and hold accountable those perpetrating violence. We call on all parties to maintain peace and refrain from violence,” a US State Department spokesperson told news agency Press Trust of India.

“We have raised these issues at the highest levels and continue to engage the Government of India on issues related to religious freedom,” the official said responding to a question.

Underlining that respect for religious freedom and equal treatment under the law are fundamental principles of the two democracies, the official said,”We note Prime Minister Narendra Modi’s call for peace and the Indian government’s pledge to prevent further violence and restore normalcy.”

PM Modi appealed for calm and peace in Delhi on February 26.

“Peace and harmony are central to our ethos. I appeal to my sisters and brothers of Delhi to maintain peace and brotherhood at all times. It is important that there is calm and normalcy is restored at the earliest,” he tweeted.

Democrat Colin Allred said that a democracy is only made stronger by its inclusion and respect for the rights of minorities.

“India is the largest secular democracy in the world. This violence and suppression of Muslims’ civil liberties undermines India’s values and risks a wider conflict,” Mr Allred said.

Democratic Party leader Bob Menendez, Ranking Member of the Senate Foreign Relations Committee, termed the violence as shocking and urged the Indian government to do more to defend all of its citizens’ rights, including the right to peaceful protest.

He also condemned President Donald Trump’s failure to “publicly voice concern” about the violence during his visit to India.

The clashes in the Indian capital erupted during Donald Trump’s two-day visit to India from February 24.

“The US must be a leading voice in standing up for democratic values and human rights, including protection of religious minorities. I urge the Trump Administration, and the rest of the international community, to condemn the violence in Delhi and press the Indian government to protect all persons in India regardless of their religion,” he said.

Indian-American Neera Tanden, who heads the Center for American Progress think-tank said that “the violence against Muslims in India” is horrifying and destroys India’s role as a beacon for democracy in Asia.

“The Modi government’s actions have created this climate and it must put an end to this. India as we know it is changing for the worse before our eyes,” Democrat Tanden said.

The Council on American-Islamic Relations (CAIR), in a statement, urged the US government to strongly condemn the violence in Delhi.

“The international community, including the US, must speak out against the growing sectarian attacks in India fuelled by anti-Muslim legislation and hate rhetoric emanating from the highest levels of Indian society,” CAIR said.

In a statement, Indian Overseas Congress (IOC) expressed serious concern over the violence.

George Abraham, IOC vice-chairman, alleged that the inaction by the Delhi police is deeply troubling.

“The Indian Government should take stern action to ensure the security of all its citizens,” he said.

Rajendar Display, IOC general secretary, hoped that the Modi government would concentrate on reviving the economy and addressing the issue of unemployment, especially amongst the educated, instead of raking up divisive issues.

He said that India could achieve progress only when there is peace and all communities work together.