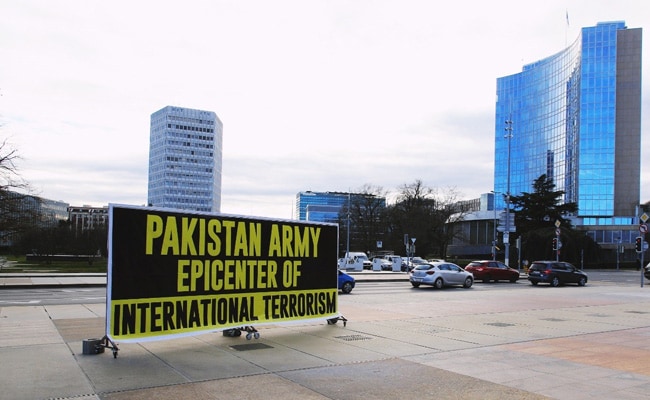 Since 9/11, Pakistan has been the epicentre of International Terrorism, minorities said

The minorities said their country was a threat to world security and thus they protested during the ongoing 43rd session of the UNHRC.

“Since 9/11, Pakistan has been the epicentre of International Terrorism. The region of North Waziristan which borders Afghanistan used to be a hub of local and international terrorists linked to groups, including Al-Qaeda and Taliban as well as other terrorist networks,” states the statement made by NGO in Geneva.

According to the NGO, the illegal contribution of the Pakistani Army to the International terrorist organisations is being protested with a banner in front of the United Nations Office of Geneva at Broken Chair.

As per minorities in Pakistan, the government has been actively involved in the terrorist activities within the region and beyond by actively sponsoring the terrorist groups. The unregulated financial structure of Pakistan paves the way for the irregular transfer of money while feeding terrorism in the country.

The terrorists in Pakistan are able to organise, plan, raise funds, and operate easily in the country because of the lack of governance and political will to address the problem,” the minorities pointed out in Geneva.

According to them, Pakistan government is not willing to solve this issue because of its illegal activities. Therefore, the UN should reprimand Pakistan, take an immediate action to stop this and establish rule of law in the region

This year’s session in Geneva will continue till March 20 and will aim to assess the member nations’ progress towards human rights goals.

This year’s high level panel discussion is themed “Thirty years of implementation of the convention on the rights of the child: Challenges and opportunities.”

There have been various symbolic protests lined up to urge the UN to take stringent action against the Pakistan Army and the government in their inability to protect basic human rights of minorities, activists, women and children from the extremist, terrorist, criminal and conservative sections in the country.