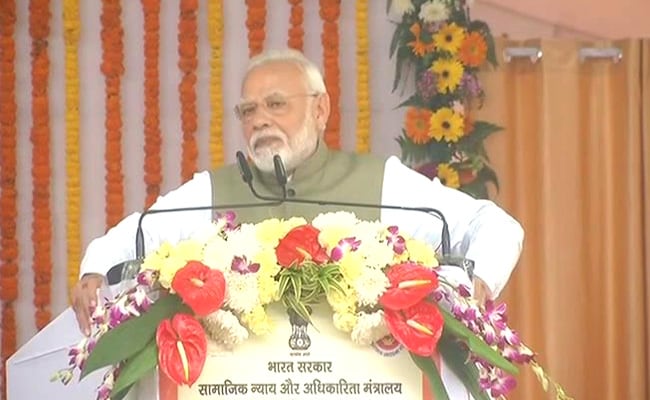 Prime Minister Narendra Modi today addressed a rally in Uttar Pradesh’s Prayagraj and distributed assistive devices to senior citizens. “During the time of earlier governments, such distribution camps were hardly organised, and such mega camps were very rare. In the last five years, our government has set up about 9,000 camps in different parts of the country,” PM Modi said.

“It’s the government’s responsibility that everyone should get justice. This is also the basis for sabka saath sabka vikaas (development for everyone). It is with this thought that our government is working to better the lives of each and every section of society. It is our first priority to look after the interest of 130 crore citizens,” PM Modi said.

The Prime Minister will later in the day lay a foundation stone for the Bundelkhand Expressway in Uttar Pradesh’s Chitrakoot. “This expressway will be the harbinger of progress for youngsters in the region and will also help the Defence Corridor coming up in the state… Next-gen infrastructure for a better tomorrow,” PM Modi had tweeted.

The Samajik Adhikarta Shivir at Prayagraj will be among the biggest assistive aid camps for senior citizens and differently abled people, PM Modi said. “It is a part of our efforts to ensure a better quality of living for them,” he said.

A statement from the Prime Minister’s Office said that to mark one year of the the PM-Kisan scheme, he will launch 10,000 farmers’ producer organisations all over the country at Chitrakoot today.

Nearly 86 per cent of farmers are small and marginal with average land holdings in the country being less than 1.1 hectare.

PM Modi will also launch a drive for distribution of Kisan Credit Cards (KCC) under the PM-KISAN scheme.