New Delhi: As soon as you cross the gigantic Signature Bridge, one of the biggest modern monuments in Delhi, you reach the riot-torn northeast suburb of the national capital. The dense, poorly-planned colonies of the region present a starkly contrasting picture from Central Delhi’s well-ordered appearances.

Starker is the way communities populate the area. The Hindu side, visibly more prosperous, is lined on the right of the highway, while Muslim colonies are thickly stacked on the left. A cloud of smoke, billowing out of burnt down Muslim shops and houses, reminds one of the gruesome riots that engulfed large parts of the area early this week.

The visuals soon start to become even more grim. Immediately after you descend from a large flyover, you land at Chand Bagh on the left. A small mazaar at the chowk lay entirely burnt, the smell of soot still thick in the air. Behind it is a maze of destruction. A fruit shop, a Maruti Suzuki showroom, a small dhaba, multiple other shops and a great number of vehicles had been torched. A few scrap dealers were scouting for salvageable goods amidst the embers. 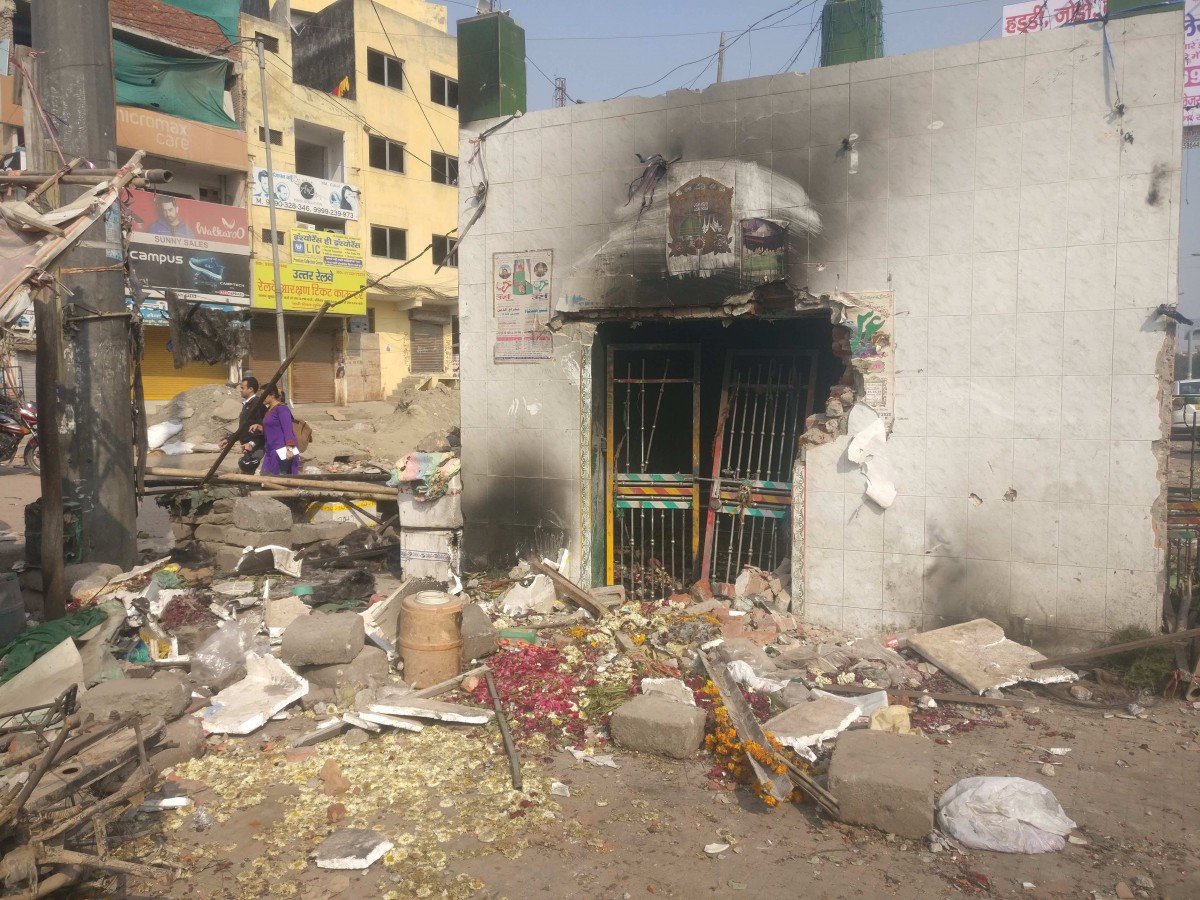 At another end, the site of a two-month-long protest against the Citizenship (Amendment) Act had been entirely destroyed. Most houses adjacent to it that had come out in support of the protest had also fallen prey to the rampant arson. Any house marked with slogans like “No CAA, No NRC, No NPR” were particularly targeted by the mob.

Also read: Calculated Chaos: The Delhi Riots Are Exactly What CAA Is About

Residents of the area, mostly Muslims, could be seen in the bylanes. There were some families who were desperately looking for auto rickshaws. Hesitant to speak to anyone unknown, a few elderly residents initially refused to speak to this reporter but eventually came around. “Gali mein aayiye. Humein yahan khatra hai (Come inside the bylane. We feel threatened here),” said Rahim*, a chef. “Look at these families. They are all fleeing,” he said, even as he appealed to the families not to leave.

Rahim then escorted this reporter to a narrow, dimly lit lane, where a few young men were busy watching videos of the riots on their mobile phones. “So much has been destroyed. How will we survive here? We are scared of this ‘New India’. This is not the country we know,” said one among them, as he showed a video in which one person is seen throwing a molotov cocktail inside the mazaar. 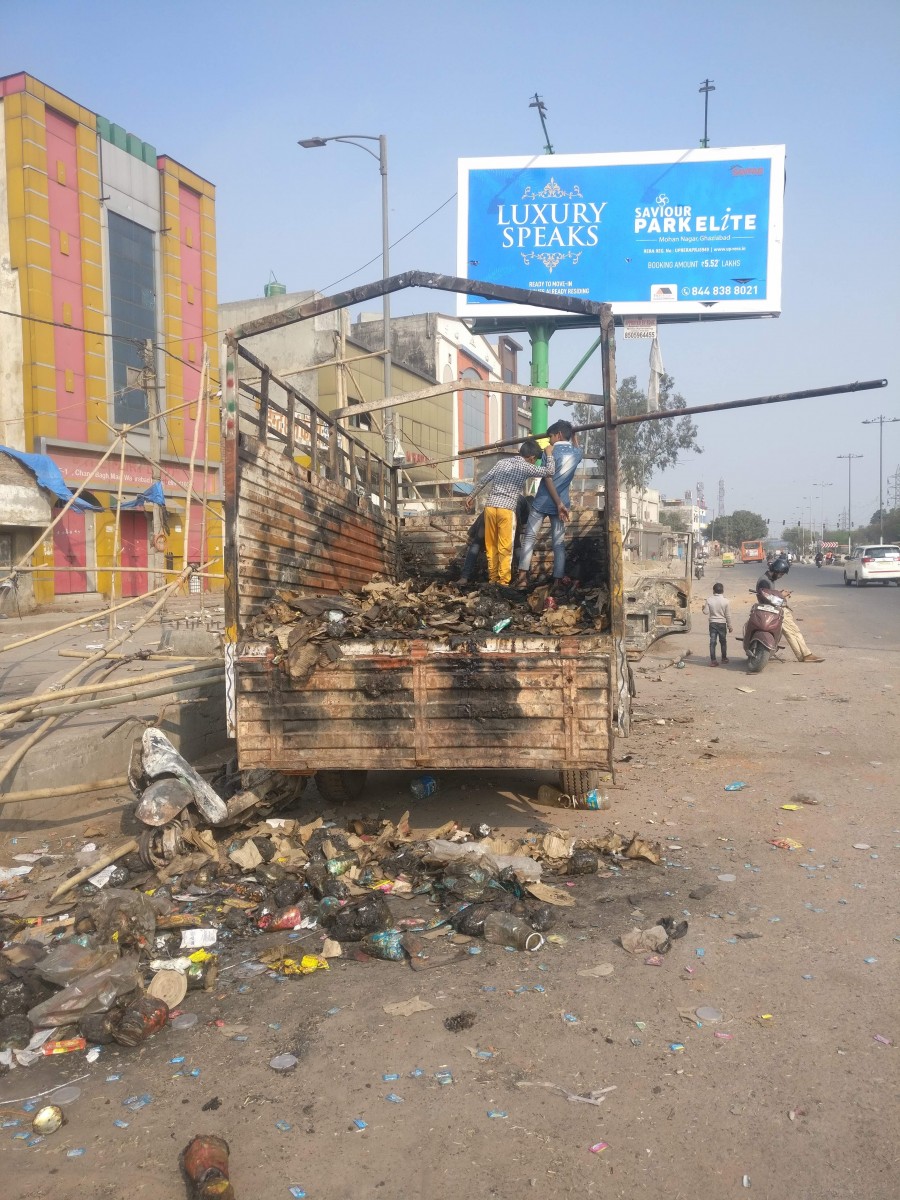 Rahim soon intervened to give them some confidence. “Why do you feel so? A few political parties cannot snatch away our right to live here,” he said.

The young man soon asked, “In Uttar Pradesh, Muslim protestors are being asked to pay compensation for damaged property. Will the rioters of Delhi now be asked to pay for the damage they have done?”

“We have nothing left; the only shop I had has been looted,” another young man, who owned a grocery store, said.

Even as Rahim attempted to placate the group’s anxiety, he narrated to this reporter how the riot escalated.

“On Monday, a mob from the other side (Hindu side), attacked the protest site. They kept firing from the top of Mohan Nursing Home (right opposite the protest venue) at the protest, because of which many protestors received bullet injuries. Some of them died too.”

They identified Muslim households and shops, and systematically attacked them, he continued. “Most were drunk. They chanted ‘Jai Shri Ram’. I am sure a true Hindu would never approve of this hooliganism,” he said.

“It soon escalated into a full-scale fight. Some from our side too also organised themselves and attacked the mob. All of us asked women and children to stay indoors. I asked all elderly people to not come outside at all. I dread the sight. So many people were injured.”

That mob came back again on Tuesday, he said, “sometime after the maghrib (evening) namaaz.”

“They started torching all our shops from here, and then moved towards Brijpuri, Mustafabad,” he added.

“We repeatedly called the police. But no one responded. The few policemen who were stationed here actively supported the mob. All of us saw it. We have it in videos,” he said, as he showed us videos where some policemen were also seen pelting stones along with the mob.

“This is from Chand Bagh. You see, you can see these shops,” he said. 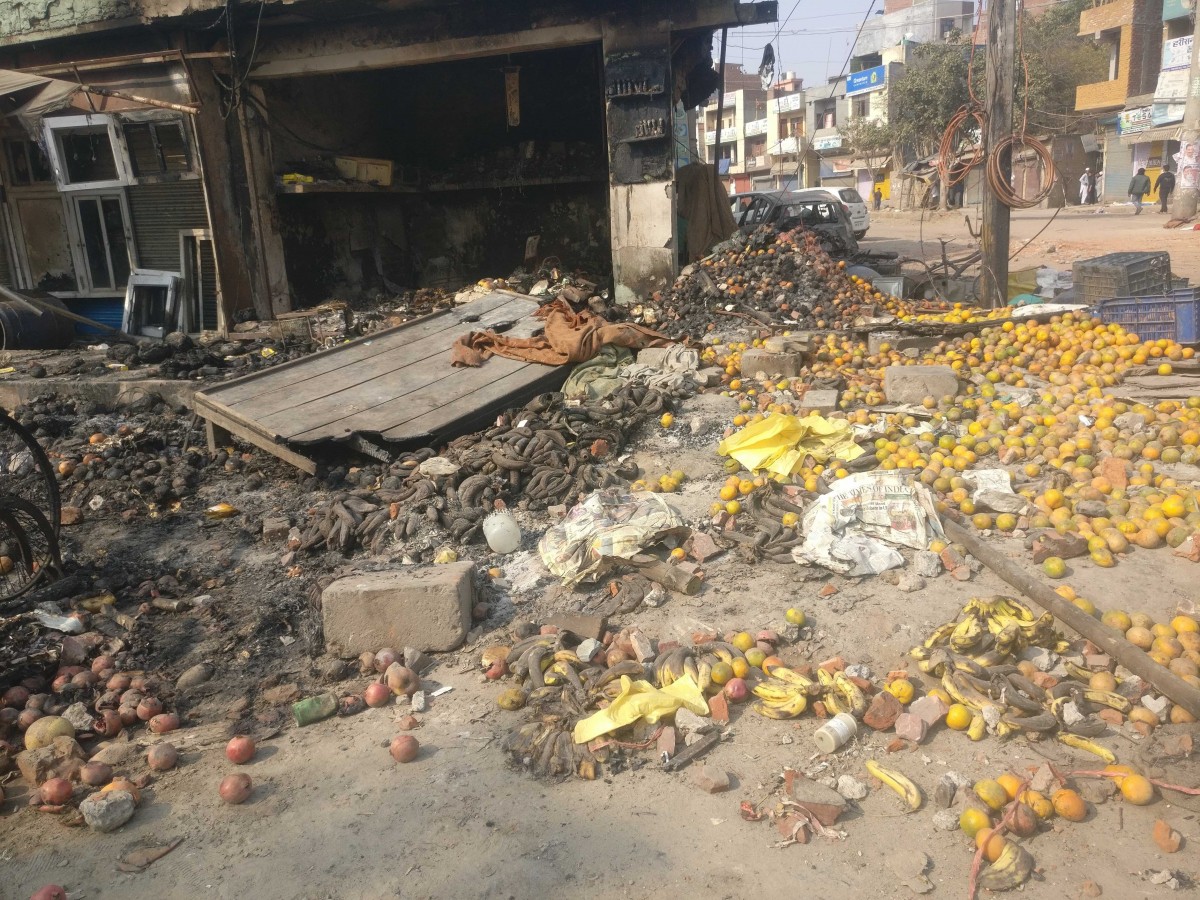 Not only the narrative, but the visuals also change as you cross over to the other side of the highway. At least four private tuition centres had been partially burnt down; a petrol pump stood entirely gutted by fire; several bikes, cars and a truck had been torched.

The locality is called Yamuna Vihar, mostly inhabited by Hindus. Unlike Chand Bagh, where Muslims were cowering out of sight, the residents here were out on the streets in full force, explaining to the media what conspired during the riots.

Also read: ‘Watched Crowds Swell Around Him Live on TV,’ Says Father of Journalist Who Was Shot

“The mob came attacking us. Imagine, they burnt down the petrol pump. So many lives could have been lost, had one petrol pump executive not released the pressure in the tanks. We owe our lives to the quick thinking of that executive,” said one Arvind Upadhyaya*. 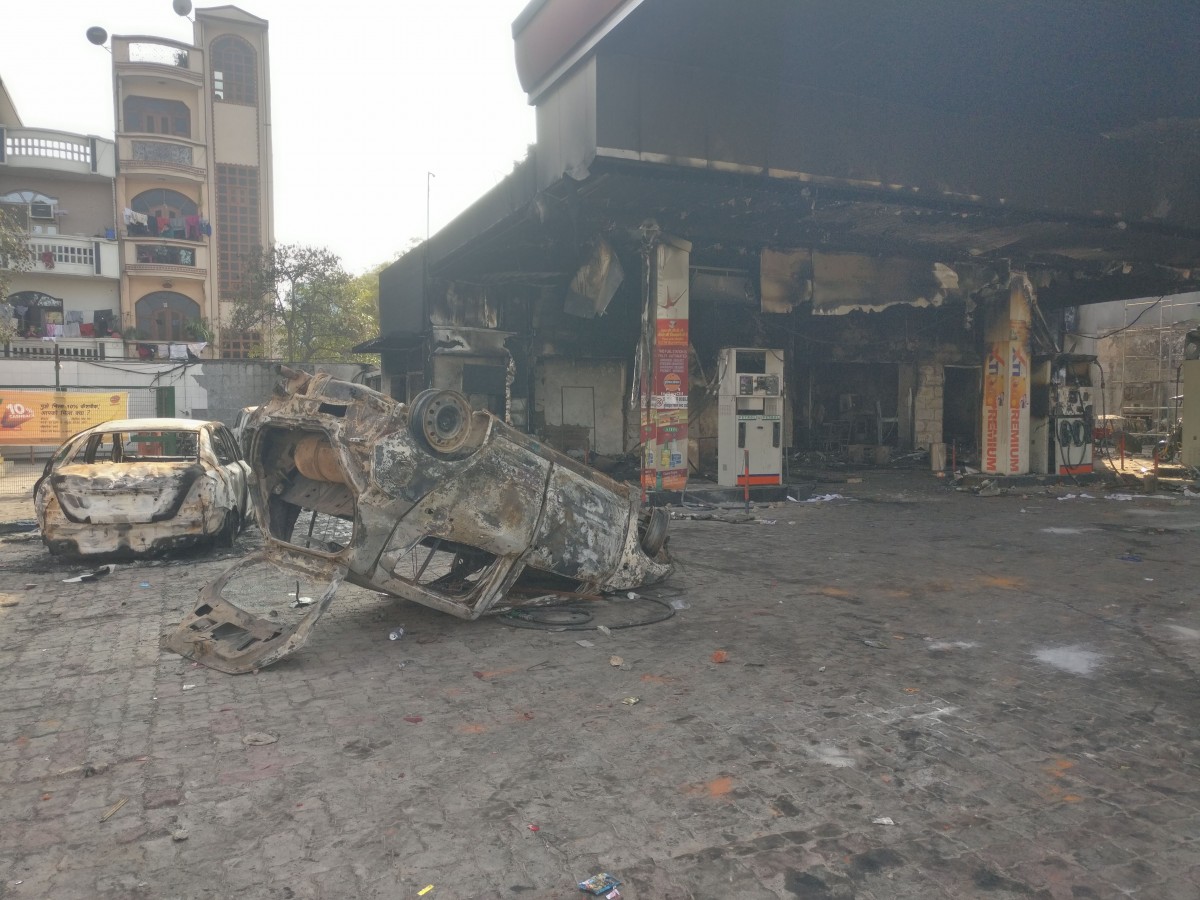 The Muslims, however, said that women protestors had blocked the highway for less than a half an hour on Sunday. Rahim had said that the protestors were responding to the Bharat Bandh call but when requested, all of them came back to their usual protest site.

Upadhyaya then pointed at a wine shop on the Muslim side and said, “The mob looted that wine shop and made bombs out of the bottles and started throwing them at us.”

“They came in hundreds and torched our properties. So many children who had come for classes at these coaching centres were trapped inside. The bikes that you see torched here belong to those students,” he said.

“People are born to various faiths. But I just want to say that no other community is as traitorous as them,” Upadhyaya said, filled with anger. 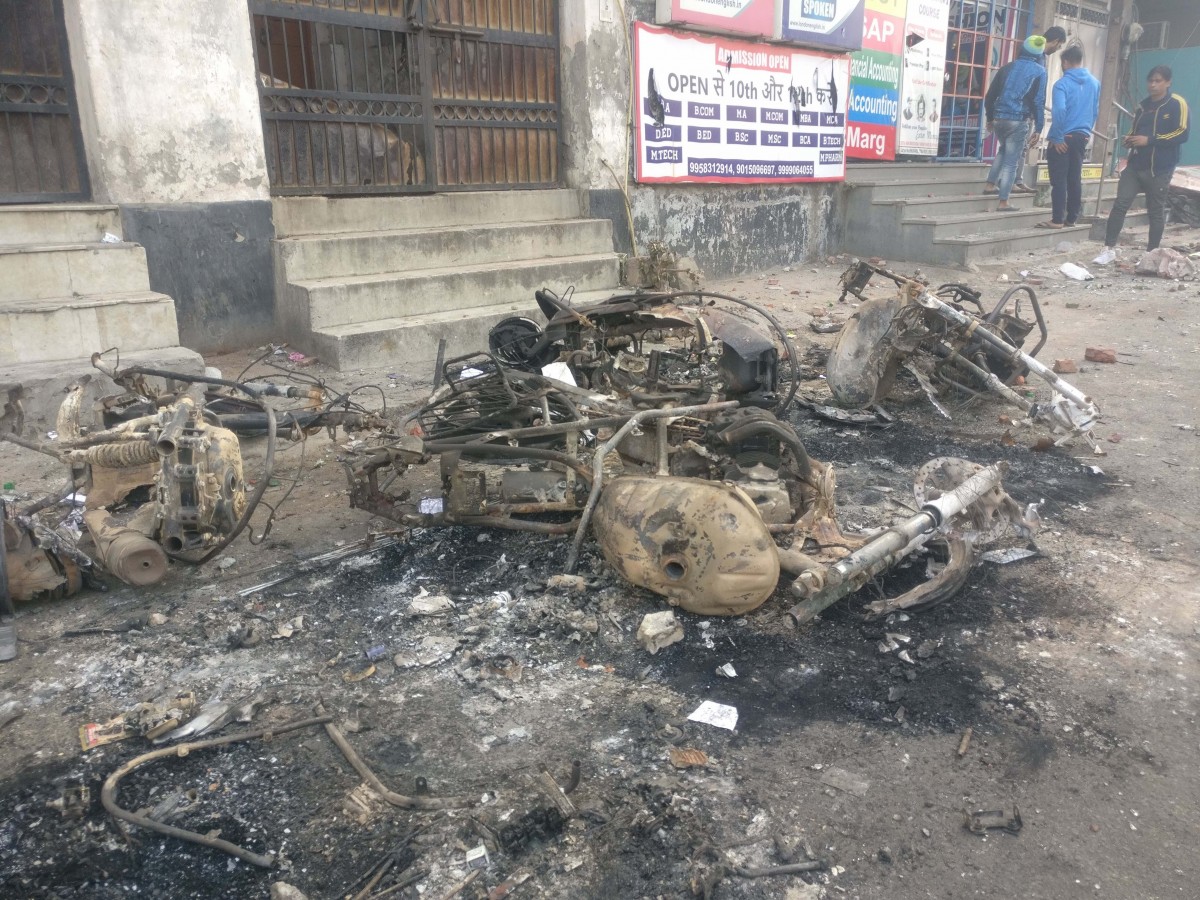 When asked how the two communities lived in harmony for so many years, he said, “We do not like to interact with each other except on business matters. “This time Hindus have told them clearly that ‘Jis thali mein khate ho, us thali mein ched nahin kar sakte (You can’t drill a hole in the plate that you eat from)’.”

Another group that stood outside the petrol pump were more vitriolic. Some of them were constantly showing reporters who were visiting the area different mobile videos where Muslims are seen pelting stones. When this reporter asked about Bharatiya Janata Party leaders like Kapil Mishra provoking Hindus against Muslims, one of them said, “They did not say anything wrong. Why should they live in India and protest against Indian laws? They are nothing less than terrorists.”

In such a polarised environment, there was, however, one common complaint. And that was against the Delhi police.

“For two days, riots continued unabated. We kept calling the police stations. So many of us personally went to the nearby police stations to inform them of the tense situation here. Yet, the police did not think it fit to deploy more forces. Now when it is relatively calmer than before, you can now see paramilitary forces and police. Why couldn’t they come before?” Upadhyaya said.

*Real names of people quoted in the story have not been used to protect their identities.

What does the Taliban-US peace agreement say?