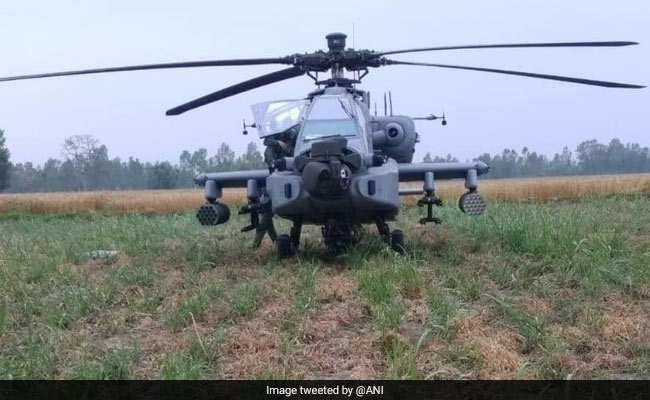 A brand new Apache attack helicopter of the Indian Air Force (IAF) made an emergency landing in a field in Punjab’s Hoshiarpur today. The two pilots are safe and the district police are in touch with the IAF’s base in Pathankot.

Reports said there was no damage to the helicopter.

“An Apache helicopter of the IAF got airborne from Pathankot airbase. The helicopter, after approximately one hour of flying had indications of a critical failure and carried out a safe landing west of Indora, Punjab,” the IAF said in a statement.

“The captain of the aircraft took correct and prompt actions to recover the helicopter safely. All crew on board the helicopter are safe and there has been no damage to any property. The aircraft will be recovered after necessary rectification,” it said.

The American-made Apaches, also informally known as “tank busters”, were bought by India in a recent deal worth $1.1 billion.

The Apaches are widely considered the most advanced attack helicopters in the world and have seen action with the US Air Force in multiple wars.