The rise in number of confirmed cases to over 7,400 on Saturday illuminates the difficulties India is facing in the fight against the coronavirus. The Centre’s latest approach bears a striking similarity to the Bhilwara model, named after a city in Rajasthan where aggressive measures were taken to avoid the spread of coronavirus late in March, to classify highly-affected areas as cluster containment zones. When the lockdown was announced, India had reported under 500 cases. Now, the toll has reached 246 and the number of confirmed cases is at 7,400.

In this situation, containment zones involve imposition of strict restrictions in areas that have clusters of the virus.

The health ministry’s containment plan for large outbreaks states that the current geographic distribution of COVID-19 mimics the the 2009 H1N1 outbreak, when big cities with substantive population movement reported a large number of cases, whereas rural areas and smaller towns with low population densities reported only few cases.

“This suggests that while the spread of COVID-19 in our population could be high, it’s unlikely that it will be uniformly affecting all parts of the country. This calls for differential approach to different regions of the country,” the document states. The plan looks at “breaking the change of transmission and thus preventing its spread to new areas”.

Inside a cluster containment zone

When a case is detected in a geographical area, an epicentre/cluster is declared by the health authorities where isolation, sealing and a containment comes into operation. “Protocol dictates that even if there a single case, for administrative purposes, administration seals adjoining area of one kilomtre radius to facilitate containment,” said PV Rama Sastry, ADG (Law and Crime), Uttar Pradesh Police.

A health ministry document recommends prohibition of all movement of vehicles or personnel and a ban on anyone entering or exiting the zone unless they are identified providers of essential services. Buffer zone is an area around the containment zone, where new cases are most likely to appear.

The size of zones is identified by states with the aim of completely halting movement in the containment zone and minimizing it in the buffer zone. “The containment zone will be divided into sectors with 50 houses each (30 houses in difficult areas),” the government release on the micro plan for containing local coronavirus transmission states.

Setting up a containment zone may also begin with identifying hotspots and demarcating an area of three kilometre radius around the epicentre, a buffer zone of additional five kilometre radius and ensuring all quarantine protocols are followed. 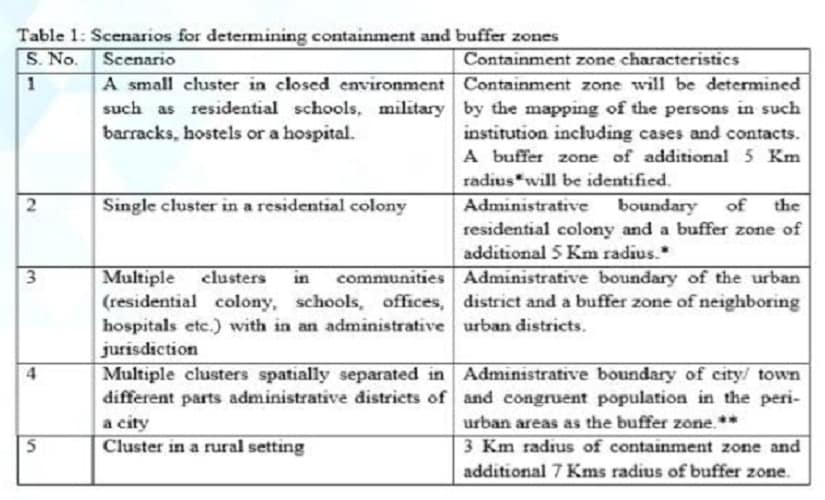 The zone will be sealed, residents will be asked to stay indoors, sanitisation conducted regularly and essentials will be delivered to doorsteps. Health workers, with the help of rapid response teams (RRTs), will go door-to-door to track active cases, seeking details such as number of people in a house, age, gender and health status. The contact history of a positive patient will be tracked and mapped.

Health workers will also conduct aggressive testing, to be continued till 14 days from the date the last confirmed case is declared negative by laboratory test. To bring into force the requirement of conducting widespread testing, the health ministry issued an advisory on 4 April to start rapid antibody based-blood test for areas reporting clusters or in containment zones and in large migration gatherings, adding that cases of Influenza-Like Illness (ILI) should be monitored in health facilities. They will provide masks to the suspect cases and to the care-givers identified by the family and follow up contacts identified by the RRTs within the sector allocated to them.

Anyone entering the containment zone for essential services shall be given a chemo-prophylactic dose of hydroxychloroquine, the malaria drug that the government is recommending for healthcare workers. The field staff brought in for the surveillance and for providing perimeter control need to be accommodated within the containment zone for which schools and community buildings will be identified.

According to Maharashtra’s containment plan, a team deputed in the cluster will comprise health department workers, nurses, malaria surveillance, ASHA and angandwadi workers, and if needed, nursing college students and will vary in size according to area and population.

There shall be enhanced surveillance in neighbouring districts for detection of clustering of symptomatic illness.

A National Centre for Disease Control (NCDC) document said that containment zones will remain in force for at least four weeks. “The containment orders will be eased if no secondary laboratory-confirmed COVID-19 case is reported from the containment and buffer zones for at least 4 weeks after the last confirmed test has been isolated and all his contacts have been followed up for 28 days. It shall be deemed to be over 28 days from the discharge of last confirmed case from the designated health. However, the surveillance will continue for ILI/SARI,” the document read.

If the containment plan is not able to contain the, a decision will need to be taken by the state to start mitigation activities.

Funding will be made available from the National Health Mission (NHM) flexi-fund and State Disaster Respond Fund can be used as per notification from the Ministry of Home Affairs.

The government has drawn out a containment plan as clusters emerged in Kerala, Maharashtra, Rajasthan, Uttar Pradesh, Punjab, Karnataka, Telangana, Delhi and Ladakh. Within containment clusters, hotspots are identified.

For example, in Uttar Pradesh, containment clusters of COVID-19 hotspots in Noida include Sector 27, Sector 28, Sector 41, Sector 44, Sector 37 and Alpha-1 Greater Noida, among others, according to an India Today report.

Across 15 districts, the state government has identified 22 hotspots within Agra, 13 hotspots in Ghaziabad, 12 hotspots in Lucknow, Noida and Kanpur each, seven in Meerut, four hotspots have been identified in Varanasi, Saharanpur and Maharajganj each and three each in Shamli, Bulandhshr, Ferozabad and Basti. Other districts where hotspots were found are Bareilly and Sitapur.

In these districts, a centralised call centre will take orders from people for essentials, curfew passes reviewed and non-essential passes cancelled. Each of these districts reported more than six cases, according to Sastry.

In Mumbai too, the civic body marked out 381 containment zones, including Lower Parel, Haji Ali, Worli, Jijamata Nagar and Adarsh Nagar, among others, ANI reported on Thursday. The Brihanmumbai Municipal Corporation has also ordered a ban on all vegetable, fruit markets, hawkers and sellers in the containment area and buffer zone in Dharavi, but pharmacies can remain open. Additionally, 30 hotspots have been sealed in Delhi.

At least 284 Indian districts have at least one COVID-19 case as of 8 April as compared to the 84 such districts that reported cases on 23 March, a report in The Hindu said. The districts witnessing the highest rise in cases in this period are South Delhi, Mumbai, Kasargod, Indore, Hyderabad and Chennai.

A number of variables will determine the success of the containment operations through geographic quarantine which include the number and size of the cluster or clusters and also how efficiently the virus is transmitting in Indian population, taking into account environmental factors especially temperature and humidity, the health ministry’s containment plan strategy read.

The factors also include public health response in terms of active case finding, testing of large number of cases, immediate isolation of suspected and confirmed cases and quarantine of contacts along with the geographical characteristics of the area.

The situation has improved in some hotspots. According to Sastry, 121 hotspots were found in the state across 15 districts after continuous monitoring earlier this week. “Some hotspots have been denotified. There were 26 hotspots in in Agra earlier and the number has come down to 22 now,” he told Firstpost. Moreover, barring a few incidents, people in Uttar Pradesh are following sealing orders and violations are being dealt with strictly, he added.