Delhi violence: They hijacked the whole school and we were locked in a room, Manoj says

A teary-eyed school guard while recalling the horrifying 60 hours he spent trapped in a room in violence-hit northeast Delhi without food breaks down narrating his ordeal.

Trapped with his family in a room in the DRP Convent School in Shiv Vihar, Manoj talks about the attack on him by an unruly mob of 300-400 who hijacked the school for 60 hours since Monday evening. He was stuck with, Rajkumar, who works as a driver, and his family. They were rescued by police on Wednesday.

“They hijacked the whole school and we were locked in a room in the other school. Our wives and children were with us. We were trapped for 60 hours with nothing to eat,” Mr Manoj, the guard at Rajdhani Public Senior Secondary School in Shiv Vihar says. Both schools, adjacent to each other, were torched.

The attackers used the DRP Convent School as a base to launch attacks. Using ropes – hung from the adjacent school – the mob entered the school, smashed blackboards, set school furniture and the library on fire. Photos show torn copies and textbooks lying on the ground. 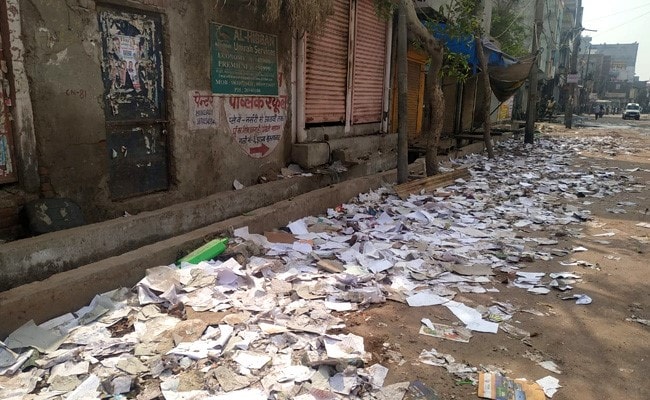 Breaking into tears while he recalls his torment, Mr Manoj goes on to say how the mob damaged everything including the gas cylinder leaving them with no food for over two days. He also says that the children, too, were beaten up by the mob.

The school staffers spoke of the terrifying ordeal of how they broke windows and escaped after 60-long hours. Police, he says, came on Wednesday, two days after the school was hijacked. And so did the fire tenders.

Shiv Vihar is one of the worst affected areas in northeast Delhi where violence over Citizenship (Amendment) Act or CAA that broke out on Sunday.

The owner of the school, Faisal Farukh, says even after repeated calls to the police they did not turn up for help.

The violence that engulfed northeast Delhi since Sunday saw relentless violence, vandalism and arson. Unruly mobs armed with sticks, stones and guns roamed the streets thrashing residents and torching vehicles. The Delhi police say the violence has gone down since Wednesday and that their officials are positioned in all sensitive areas of the national capital’s northeast. Forty two people have died and hundreds have been injured in the clashes over the contentious citizenship law that for the first time makes religion the test for citizenship of India.