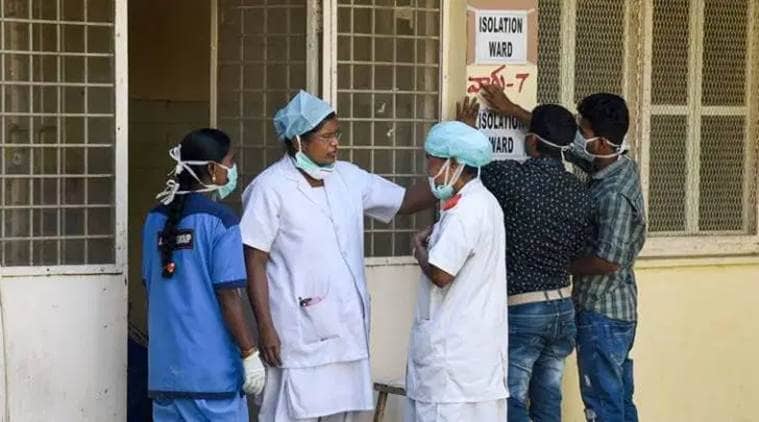 The recovery rate of positive cases too, has been higher in Kerala compared to other states and the national average.

Coronavirus (COVID-19): Kerala saw just two new positive cases of the novel coronavirus infection on Sunday, continuing to buck the trend of rapidly increasing numbers of cases in several states. On six of the last 10 days beginning April 3, the state, which has several identified hotspots of the disease, has seen only single-digit increases in the numbers of daily new cases. COVID-19 LIVE updates

The recovery rate of positive cases too, has been higher in Kerala compared to other states and the national average. A record number of 36 patients were cured/discharged on Sunday, taking the number of recoveries to 179, which is almost 48 per cent of the total 375 cases since the beginning of the outbreak, according to state government data.

All-India numbers posted by the Ministry of Health and Family Welfare (which lag behind the numbers provided by state governments by some time) on Sunday evening showed 8,447 cases and 765 cured/discharged, a much lower recovery rate of about 9 per cent.

Maharashtra had more recovered cases than Kerala (208 as opposed to 142, according to Union Health Ministry data), but at 1,761, it has also had almost five times as many cases as Kerala. As of Sunday evening, according to central government data, Kerala accounted for more than 18 per cent of the total recoveries in the country, while contributing to a little more than 4 per cent of the total number of cases.

Read | Slight but ‘noticeable’ flattening of growth curve in India 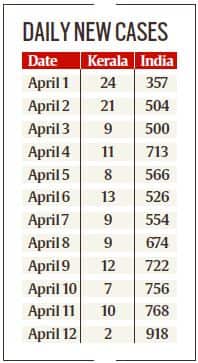 Until March 26, Kerala had the largest number of positive cases in India, following by Maharashtra. In the days since then, the theatre of COVID-19 has shifted to other states. New hotspots with a sudden spurt in cases have emerged elsewhere in the country, even as the emergence of new cases in Kerala has progressed slowly.

Kerala Health Department officials said the growth trajectory of COVID-19 has hit a slope for over a week now.

Don’t miss from Explained: How a dollar swap line with US Fed can help in uncertain times

According to this official, there is no indication of community spread of the disease at the places identified as hotspots. “The infection in Kerala has been so far confined to persons with travel history and their contacts, under home quarantine. As the general incubation period of those returned from abroad is almost over, now the focus is on their primary contacts. The testing of samples from all contacts in the high-risk category are expected to be completed in a week. However, we haven’t lowered the vigil and are working with the realisation that there is a chance of community spread or spike in cases at any time,’’ the official said.

Of the 375 cases reported since January 30, as many as 233 have a history of travel, according to state government data. Seven foreign tourists tested positive in Kerala, and 19 positive cases are those of individuals who attended the Tablighi Jamaat congregation in New Delhi’s Nizamuddin area in the middle of March. The remaining are locally infected cases or primary contacts.

Only two people have died from the disease in Kerala so far. A third death that took place in a Kannur hospital on Saturday is of a 71-year-old man from the enclave of Mahe, which, though geographically located in Kerala, is part of the Union Territory of Puducherry. Saturday’s victim had no travel history.

In Thiruvananthapuram district, where a 68-year-old died on March 31, authorities had feared community spread. But even though the source of his infection has not be traced so far, no fresh cases have been reported in the places where he had socialised. The patient’s suspected sources of contact too, have tested negative.

Data from the districts of Kasaragod and Kannur, which together account for 63 per cent of cases in Kerala as of Sunday evening, are encouraging. In Kannur, out of 71 cases, 36 have been discharged. In Kasaragod, these numbers are 166 and 61, respectively. That means, 41 per cent of positive cases from these districts together have been cured.

In both these districts, the cases were clustered in a few locations, which made containment more effective. Around 90 per cent of the positive cases in these two districts had returned from Dubai, mainly from the COVID-19 hotspot of Naif. Locally transmitted cases are family members of these arrivals from abroad.

In Kasaragod district, 20 contacts of a positive case with travel history have been infected. In Kannur district, eight members of a family have been infected the same manner. Several villages and urban centres in these districts have been virtually sealed and lockdown steps have been increased, completely blocking people from moving out of their homes.

In other 11 districts in Kerala, COVID-19 cases came down to either zero or in single digit as on Sunday.

On the encouraging number of recoveries, an official said: “A lot of factors contribute to the fast recovery of a COVID-19 patient. The age of the patient, severity of symptoms, and the virus load are critical elements. All over the country, the treatment protocol suggested by the Indian Council of Medical Research (ICMR) is followed diligently. We have to study the fast recovery scenario in Kerala.”

As per the state data, 82 per cent of the positive cases fall within the age bracket of 20-60, and a majority of the patients are in the working age category.

Read | From UP to Maharashtra, farmers say problem not in the field but in market

Health Department sources said most positive cases turned negative within three weeks of diagnosis. However, one of the three positive cases with travel history from Wuhan took nearly a month to become negative, despite the mild symptoms and young age.

A member of the state expert committee on COVID-19 cautioned that the danger was not over for Kerala yet.

“The post-lockdown scenario would be decisive for the trajectory of the disease. Scores of expatriates are waiting to fly back to Kerala from the United States and the Middle East. Besides, the growing number of cases in other cases, particularly in Tamil Nadu, is also a matter of concern considering the mobility through the borders of the states,’’ he said.

Central government data on Sunday evening showed 969 cases in Tamil Nadu – the most after Maharashtra and Delhi – and 10 deaths.