Families of the victims at GTB hospital, Thursday. Abhinav Saha

On Thursday, the death toll from the violence that rocked Northeast Delhi touched 38. While 34 deaths were reported from GTB Hospital, three were reported from Lok Nayak Hospital and one at Jag Pravesh Chandra Hospital. Fifteen post-mortems have been performed by hospitals so far. The Indian Express spoke to families of 30 people who lost their lives in the riots.

Ali worked as a painter and is survived by his wife and three children, two girls and a boy. His niece said, “He was returning from Bhajanpura, where he worked… We couldn’t find him for three days… until today.”

A native of Hardoi, Tiwari worked in a cardboard factory and lived in Karawal Nagar with his wife and two children. Standing outside the mortuary at GTB Hospital, his elder brother said: “I can’t begin to express how our family is dealing with the news. He has gone too soon.”

Irfan is survived by his wife and two children and worked as a labourer. Outside the mortuary of GTB hospital, his mother Khuresha (57) couldn’t stop crying. Her elder son Mohd Furkan (32) tried to console her. “He earned Rs 8,000 per month. Who will take care of his family now?” Relatives wait for bodies of victims outside the GTB Hospital mortuary in Delhi on Thursday. (Express photo: Abhinav Saha)

A resident of Bhajanpura, Thakur was preparing to take the civil service examinations, to be held in April. He was the youngest son of his family. He was shot in the chest. His father is an RPF officer. “There was no ambulance in the area and we ferried him on a scooter to the nearest clinic. We were then referred to GTB Hospital. He was under observation for a few hours… he died later,” said his cousin Ankit.

A blacksmith, he hailed from Hapur. He had been missing since Monday. His elder brother Yunus reached GTB Hospital on Thursday to identify the body. An Intelligence Bureau security assistant, Sharma’s body was pulled out from a drain in Chand Bagh a day after he went missing.

A resident of Mustafabad, Shahbaan was shot dead when he was closing up his welding shop. According to his family, the mob also burned down his shop.

Thakur, who worked in a welding unit, is survived by his wife and two children. A resident of Khajuri, he was hit with stones at Chand Bagh while he was on his way to home.

From Rajasthan’s Sikar, he joined Delhi Police as a Constable in 1998. He was currently posted in the office of ACP/Gokalpuri as a Head Constable. He is survived by his wife and three children. Mother of Md Shahbaz, 22, who is not found yet. His mother is waiting to identify among some dead bodies at Delhi’s GTB Hospital mortuary post the riots on Thursday. (Express photo by Abhinav Saha)

She died after her family’s home in Gamri village was set on fire, said her family. Her son, Mohammad Saeed Salmani, operated a garments workshop on the first two floors of his house.

A resident of Shiv Vihar, Anwar ran a poultry farm and is survived by his wife and two daughters. His relative, Salim Kassar, said his body was charred and it was tough to identify him at first. “I could tell it was him by looking at a mark on his leg,” he said.

Kumar worked as a driver and is survived by his wife and two children. Ashish Kumar, his nephew, said Kumar was on ventilator support for seven-eight hours. On Thursday, he was declared dead at 3.40 pm. Funeral procession of a riot victim being carried out in northeast Delhi’s Mustafabad on Thursday. (Express photo by Gajendra Yadav)

Residents of old Mustafabad, brothers Aamir and Hashim had been missing since Wednesday afternoon. Their elder brother Sheruddin (31) came to the hospital to identify their bodies on Thursday evening.

From UP’s Badaun, he was thrown into a drain by a group of people in Gokulpuri. Survived by his wife and three children, he used to work as a driver in Kardampuri.

A resident of Arvind Nagar, Ghonda Chowk, he is survived by his wife and two sons. His elder son, Nitin Kumar (25), was with him when the mob attacked the two. His bike was also set on fire. Shopkeeper Danish came to his shop which was vandalised during the riots in Chanbagh area of northeast Delhi. (Express photo by Gajendra Yadav)

A businessman, Bhan was shot in the head on Monday in Karawal Nagar. He is survived by his wife, 22-year-old son and 15-year-old daughter.

A resident of Brijpuri, Zakhir worked as a welder. He died on Tuesday evening after he suffered a bullet wound to his head and multiple injuries in his stomach.

A resident of Kardampuri, he used to build portable welding machines. He is survived by his wife and son, aged a year and a half, and daughter, aged three. He was shot in the stomach. 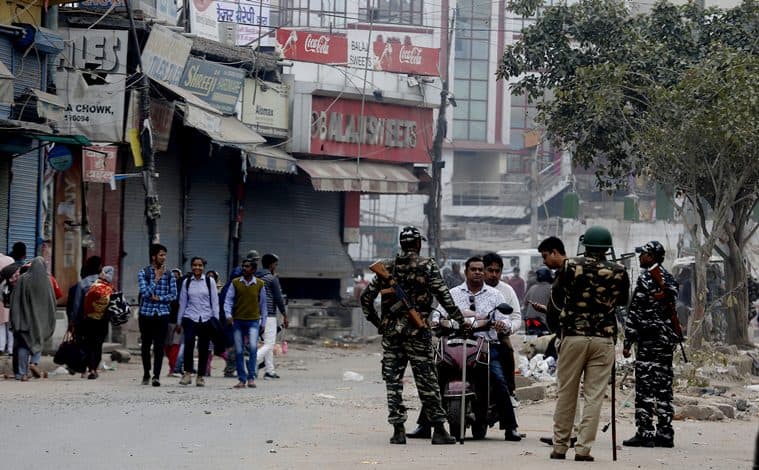 He worked in a private factory in Jhilmil and is survived by his wife, son and daughter. He was shot in the head.

An electrician, Hussain sustained five bullet injuries. He is survived by his wife. The two got married on February 11.

A resident of Ghonda, he was shot in the stomach on Tuesday. He used to run a motor garage in Wazirabad.

A construction worker, Mehtab was killed by a mob on Tuesday. His family waited for two days outside GTB Hospital for his body. On Thursday, they took him home.

From Uttar Pradesh, Furkan used to design wedding boxes. He is survived by his wife and two children — a girl aged four and a boy aged three and a half years.

Solanki was pursuing civil engineering and worked in a private company. His father, Hari Singh Solanki (69), said the family was making preparations for his sister’s wedding in April. Rahul died from a gunshot wound.

He worked as an auto driver and is survived by two children.

From Bulandshahr, Alvi died on Monday evening from a gunshot wound in the stomach. He worked as an autorickshaw driver and got married four months ago. His wife, Shaziya, is pregnant.

He was brought to Lok Nayak Hospital. A group of lawyers at the hospital said his family was part of the sit-in protests at Seelampur.

Hailing from Bhajanpura, Ali was shot in the head. He owned an electrical shop.

A resident of Old Mustafabad, Yusuf was a carpenter. He is survived by seven children. He was returning home from Noida when he was attacked.