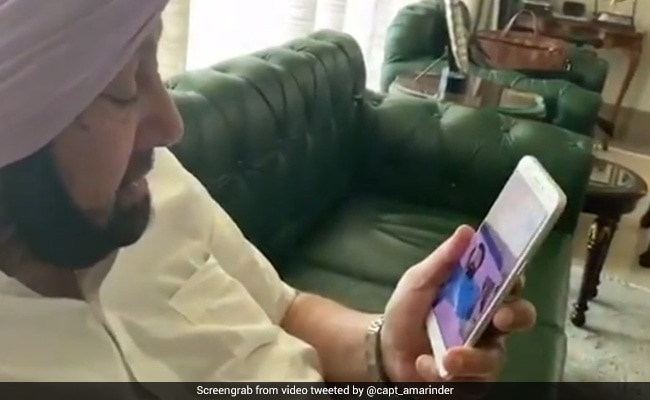 Punjab Chief Minister Amarinder Singh today shared a video of his conversation with a police officer who underwent a surgery to operate his hand severed while enforcing lockdown orders in Patiala on Sunday. Assistant Sub-Inspector Harjeet Singh‘s hand was cut with a sword while three other Punjab policemen sustained injuries when they were attacked by a group after being asked to show curfew passes at a vegetable market in Patiala district.

The video begins with Mr Singh addressing the police officer as “beta” or son as he enquires about his health. “We are very proud of you,” the minister is heard saying to the police officer, who is seen lying on the hospital bed.

“Spoke to ASI Harjeet Singh, who is recovering after his operation, to enquire about his health. The composure & bravery with which he spoke today is truly worthy of admiration. Wishing him a speedy recovery,” Mr Singh tweeted.

Spoke to ASI Harjeet Singh, who is recovering after his operation, to enquire about his health. The composure & bravery with which he spoke today is truly worthy of admiration. Wishing him a speedy recovery. pic.twitter.com/dVYk01S5Gk

The police officer underwent a 7.5-hour long surgery successful surgery at a hospital in Chandigarh yesterday.

Amarinder Singh had shared the news on Twitter and congratulated the doctors and support staff for “their painstaking effort”.

“I am happy to share that a 7.5-hour long surgery has been successfully completed at PGIMER to repair the severed wrist of ASI Harjeet Singh. I thank the entire team of doctors and support staff for their painstaking effort. Wishing ASI Harjeet Singh a speedy recovery,” he tweeted.

“The re-implantation started at around 10 am. Both radial and ulnar artery, the vena comitans and an extra dorsal vein were anastomosed. All the flexors and extensor tendons were repaired. The nerves at the wrist were repaired and the bone fixation was done using three K-wires. The surgery went on for about 7.5 hours,” said a doctor at the PGIMER.

Earlier, Mr Gupta told NDTV that a vehicle carrying Nihangs, a religious sect, “crashed through several barricades on the periphery of the vegetable market” around 6 am. When the police team stopped them and demanded to see their curfew passes, the lockdown violators attacked the police party, he said.

Punjab, where thousands of people staying abroad returned after the outbreak started, has extended the lockdown till May 1.