Parliament Live Updates: Rajya Sabha proceedings were on Monday adjourned till 2 pm after the entire opposition vociferously protested over the issue of communal violence in the national capital, with members alleging that the government slept while Delhi burnt. Lok Sabha was also adjourned till 2 pm as mark of respect to a sitting member who died recently.

Opposition MPs including those belonging to the Congress, Left, TMC, SP, BSP and DMK were up on their feet shouting slogans and accused the government of failing in its duty. Chairman M Venkaiah Naidu said the issue was definitely important but the priority should be to restore normalcy and then discuss ways and means of preventing it. When his appeals to members to resume their places went unheeded, he adjourned proceedings till 2 pm.

On AIMIM leader Ismail’s provocative speech, Owaisi says, “My MLA made comments and we reprimanded him. What has this government done to its leaders. In 2002, the government kept quiet. Ehsaan Jafri was not given any help. We saw something similar with what happened to Naresh Gujral when he called the police.”

Owaisi Hits Out at PM Modi, BJP | AIMIM Chief Asaduddin Owaisi says, “This was not a riot. This was a genocide, allowed by the Delhi Police. The government kept silent. All that the PM did was to tweet on this. Why can’t the PM speak on Delhi violence? He knows that a former BJP MP was the one who incited the violence. We all know what Anurag Thakur said.”

Meanwhile, at the Rajya Sabha, Venkaiya Naidu says notices for discussion on Delhi violence to be taken up after the situation normalises. Ghulam Nabi Azad tells the Chairman to take up the matter at the earliest, but Naidu refuses. Lok Sabha Adjourned Till 2pm | Lok Sabha adjourned till 2pm after an obituary reference to Baidyanath Prasad Mahto, JD(U) MP from Valmiki Nagar, Bihar who passed away on February 28. Aam Aadmi Party MPs protest in front of Gandhi statue inside the Parliament premises, over violence in Delhi. Trinamool Congress leaders hold a blindfolded protest near Gandhi statue at the Parliament over recent incidents of Delhi riots: 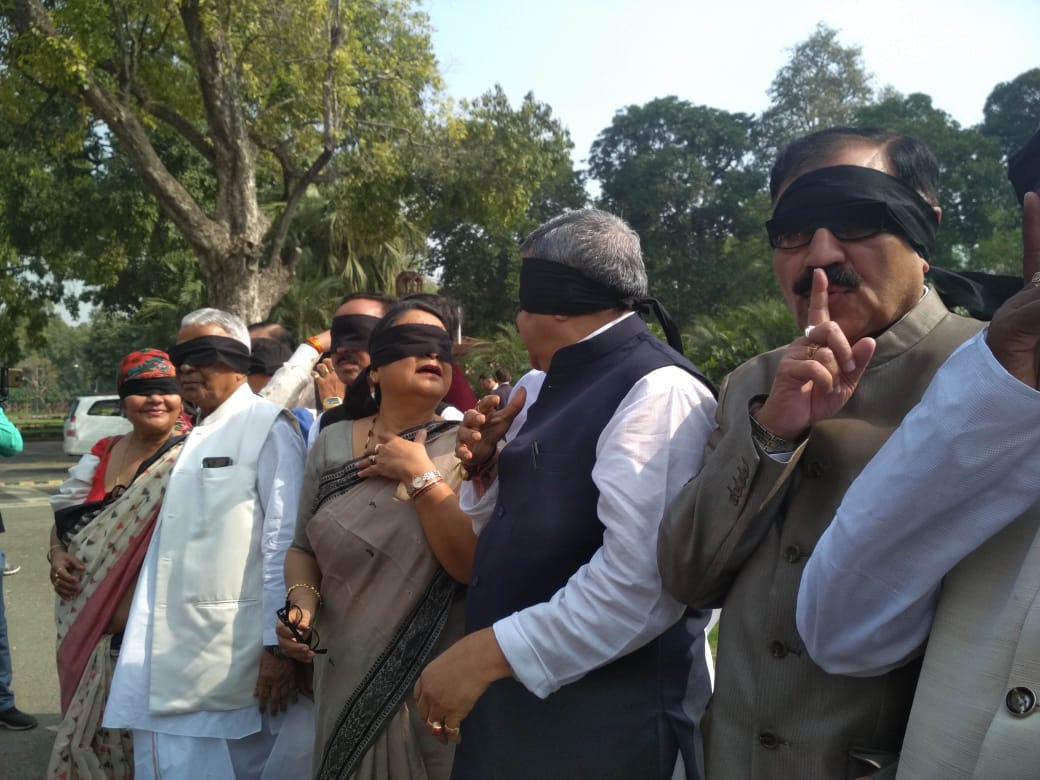 Congress’ notice in the Lok Sabha:

23 Notices on Delhi Riots in Lok Sabha | The Opposition parties separately sent 23 notices in Lok Sabha in connection with the deadly Delhi riots. Congress, Shiv Sena, Trinamool Congress, AIMIM and DMK are among the parties to have sent notices in the Lower House of Parliament.

TMC to Stage Dharna | Trinamool Congress MPs will stage dharna near Gandhi statue at the Parliament today at 10.30 on the first day of the second half of the Budget Session
.

Opposition to Demand Home Minister’s Resignation | Commotion is anticipated during the session as the opposition parties are set to strongly demand Union Home Minister Amit Shah’s resignation over alleged police lapses and raise the issue of communal riots in Delhi. Aam Aadmi Party’s Sanjay Singh said he will demand a Joint Parliamentary Committee (JPC) to investigate the riots.

Budget Session Begins Today | The second part of the Budget Session of Parliament will begin today and expectations of a ruckus over Delhi riots is high. The Budget session of Parliament began on January 31 and went on a break on February 11, and will continue till April 3. The opposition parties are set to strongly pitch for Union Home Minister Amit Shah’s resignation over the issue of communal riots in Delhi.

The Congress submitted a leave of motion notice in the Lok Sabha stating that the “unprecedented violence” during the riots had dented India’s secular credibility and tarnished the image of the country globally. Overall, 23 notices were submitted in both houses against the violence.

The Congress and the Trinamool Congress staged separate dharnas at the Gandhi statue in the Parliament premises as well. Aam Aadmi Party’s Sanjay Singh said he will demand a Joint Parliamentary Committee (JPC) to investigate the riots.

Meanwhile, HRD Minister Ramesh Pokhriyal ‘Nishank’ is set to move the Bill to establish and incorporate Universities for teaching and research in Sanskrit, for consideration.

Besides, Health Minister Harsh Vardhan is likely to move a motion for election to the All India Institute of Medical Sciences (AIIMS) at Gorakhpur, Bathinda, Guwahati, Bilaspur, Deoghar, Bibinagar, Vijaypur and Rajkot.

The Congress is likely to submit an adjournment motion in Parliament today over the devastating violence in North East Delhi that killed over 40 people and left more than 200 injured.

Yesterday, Congress’ leader in Lok Sabha Adhir Ranjan Chowdhury said the party will strongly raise the issue of riot-torn Delhi and ask why the violence happened.

“The government has miserably failed to maintain law and order. I think there must be some sort of a nexus between the rioters and a section of police officials, which resulted in gruesome killings and arson that has tarnished our image across the globe. This is a matter of serious concern for us,” he said. “We will continue to raise the demand of Home Minister Amit Shah’s resignation on the floor of the House.”

The Budget session of Parliament began on January 31.