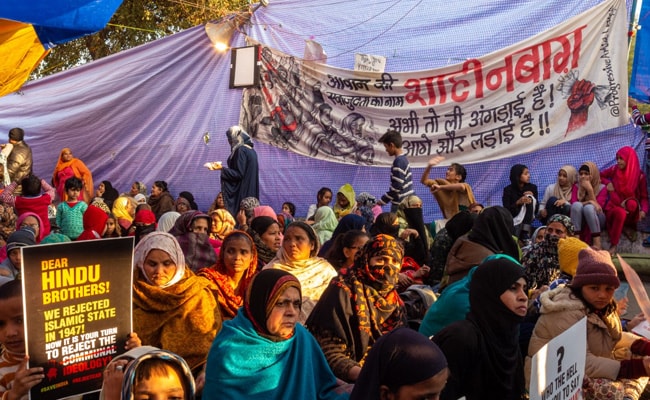 Citizenship Act Protest: People have been protesting in Shaheen Bagh for over two months now (File)

The Delhi Police have tightened security at south Delhi’s Shaheen Bagh, where people have set up tents and dug in for over two months to protest against the controversial Citizenship Amendment Act (CAA), ahead of a march at 3 pm called by the protesters.

The police’s move also came after a rightwing group, Hindu Sena, said it would hold a march to Shaheen Bagh, only to be called off later.

The police have banned large gatherings around Shaheen Bagh.

“As a precautionary measure, there is heavy police deployment here. Our aim is to maintain law and order and prevent any untoward incident,” senior police officer DC Srivastava said.

The protesters led by women have said they want to meet Home Minister Amit Shah. Last month, they got up from the tents and started marching down the road, but were persuaded by the police to return.

A stretch of road at Shaheen Bagh remains blocked. Commuters say they have been inconvenienced due to the long detour they have to take during rush hours. Some shopkeepers in the area who have had their shutters down for over two months have said they are running in losses.

The Supreme Court is hearing petitions seeking to clear the protesters from Shaheen Bagh.

This protest against the Citizenship (Amendment) Act or CAA has emerged as the epicentre of nationwide protests and the main target of the BJP. The CAA, for the first time, makes religion the test of Indian citizenship. The government says it will help non-Muslim refugees from three Muslim-dominated neighbouring countries if they fled to India because of religious persecution Critics say the bill discriminates against Muslims and violates secular tenets of the Constitution.