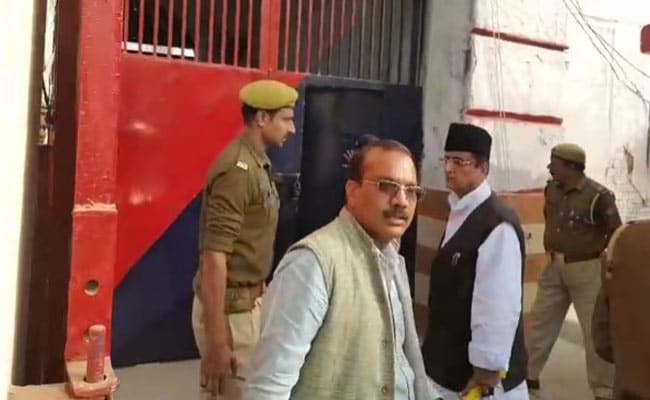 Visuals from Rampur jail showed Azam Khan, his family being brought to prison in a police jeep

Samajwadi Party MP Azam Khan, his wife Tanzeen Fatima and their son Abdullah Azam, a former MLA, have been sent to jail for seven days by a court in western Uttar Pradesh’s Rampur town. The next hearing of the case will be on Monday.

The Khan family had been ignoring summons by the courts in various cases lodged against them in the last year by the Yogi Adityanath government, as a result of which warrants were issued against them.

Azam Khan, the MP from Rampur, who defeated the BJP’s Jaya Prada in a bitterly fought Lok Sabha election in 2019, has cases of land grab, encroachment, book theft, power theft, statue theft, buffalo theft, goat theft against him, while his son Abdullah Azam was booked by the local police for forgery in birth date documents.

A local court in Rampur had earlier ordered attachment of the properties of the three after non-bailable warrants were issued against them in one of the cases and they still refused to appear in court. The Samajwadi leader had made several attempts to get anticipatory bail but the same was denied by the court.

Visuals from the Rampur jail showed the politician and his family being brought to prison in a police jeep and hundreds of Samajwadi Party workers collected outside the jail complex raising slogans in his favour. “He is a big leader. The BJP government, ever since they came to power, is foisting false cases on him to malign him. But Azam Khan respects the law and the law will give him justice,” said Naresh Uttam Patel, the state president of the Samajwadi Party’s Uttar Pradesh unit.

With inputs from IANS