New Delhi: After being confined indoors for the last five days, members of the Muslim community in Delhi’s Shiv Vihar stepped out of their houses on Friday afternoon. It was time for the first ‘jumma namaaz’ (Friday prayers) since violent riots shook the national capital earlier this week.

Close to 50 men walked past houses and shops that had been torched during riots and gathered at what is locally known as the Umar Masjid. The mosque’s Imam left for his native village in Uttar Pradesh last Sunday night after rioters started spreading havoc in the area.

In his absence, the senior-most member of the community, who wished not to be named, had agreed to conduct the sermon. He started his “longer than usual” homily by taking leaves out of the Quran.

“The holy book teaches us that we are one. I expect all of you to follow the verses that have been taught to you,” he said.

One by one more men started joining the congregation. These were scared faces. Shiv Vihar is one of the worst riot-affected areas in Northeast Delhi – deaths of four men have been reported in the locality, with several injured in hospitals.

“The disaster that has taken place has caused irrevocable harm to all of us. At such times, all we must be do is stick together as brothers and sisters. We must protect each other irrespective of their faith,” said the substitute Imam.

Among the gathering in the mosque was a seven-year-old boy seated in the last row, who found the sermon difficult to hear and arose in the middle. Just as he got ready to move further away, a man caught him by the arm and signalled him to sit.

“You need to protect each other and treat everybody like your family member, no matter who,” the man answered, satisfying his curiosity, rattling off words from the sermon.

The brick-walled mosque’s air was filled with soft murmurs of inquiry about family members. Almost all Muslim women and children had left the area, escorted by the menfolk to their relatives’ homes in other parts of the city to ensure their safety. The men themselves had stayed back to protect their homes. Rows of locked houses indicated the same.

The sermon continued. Meanwhile, a few men passed a message saying, “Don’t gather outside the mosque after namaaz. Leave for your home immediately.”

The gathering comprised people whose shops were torched, some whose houses were razed and others whose relatives were injured. Vehicles of several men were also gutted in the violence. The deadliest clashes witnessed in the national capital since the 1984 anti-Sikh riots have so far claimed 42 lives. More than 250 residents have been injured.

“My chemist shop was burnt down in front of me. I had to run for my life,” said Haji Naseer, a local resident. “We were outnumbered. They came with helmets and scarfs on their faces and looted and burnt everything. My property worth Rs 6 lakh to Rs 8 lakh was lost.”

“Because of what happened, these police officers are having to guard us. Why do we need protection in our country? Isn’t this our India as well?” asked Sultan, a local resident who was also part of the congregation. “This is the first time in five days that all of us have come out together only because it is ‘jumma namaaz’. We have been inside our homes since Sunday.”

Immediately after prayers were offered, senior members of the community took charge to ensure the crowd disbursed. Fifty men hastened back to their houses and within minutes the area once again assumed its demeanour, that of a ghost town. 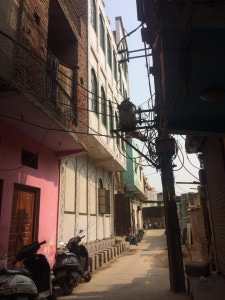 1 Killed In Clash During Meeting On Citizenship Law In Meghalaya