Almost seven months since Jammu and Kashmir ceased to be a state, the Union Territory has experienced a variety of administrative problems. Among the reasons laid out by Union Home Minister Amit Shah for the abrogation of Article 370, that granted Jammu and Kashmir special status, was that the youth in the state had been radicalised due to the lack of opportunities and employment. This, he stated, could be reversed with a definite plan and a developmental goal.

Among the hopes offered to the people of Jammu and Kashmir was a huge and exclusive employment package for youths announced by former governor of the state Satyapal Malik soon after the revocation of Article 370. He promised to provide employment to as many as 50,000 youths, however, no job notification regarding this scheme has been released so far, leading to the ongoing employment crisis.

“It [scrapping Article 370] was a difficult decision to swallow and the Centre had to somehow make up for this trauma by offering something that could be developmental and lead to prosperity, ” said a journalist who has been reporting on Kashmir. There has been uncertainty among locals about the employment process — which seems to be unending for the aspirants, especially those preparing for different examinations.

The seven-month-long internet shutdown and the complete clampdown of communication for around four months didn’t help matters. On 28 January, the ban on the internet was partially lifted, with data speeds restricted to 2G-levels. If the purpose of this exercise was to get students back to studying, the firewalling social media and long loading times for whitelisted websites told a different story. A majority of students who claimed to have missed their examinations blame the lack of information outreach that the government could have provided as an alternative after the communication shutdown. 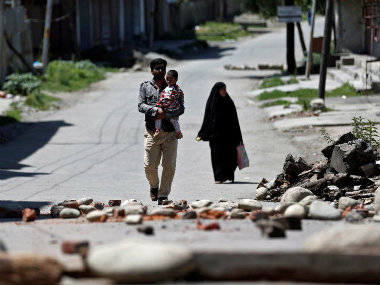 Mohammad Imtiyaz, a candidate from North Kashmir who had applied for various posts advertised by the territory’s major recruiting authority — Service Selection Board (SSB), missed his examination that had been conducted sometime during the curfew. “A majority of students missed their exams owing this communication blockade in the beginning and later because of the internet shutdown,” he said. After the partial internet restoration, Mohammad logged onto the website only to find that he had missed his exam.

SSB chairman Khalid Jahangir said, “We have to follow government orders when it comes to the recruitment process in any situation.” The chairman declined to offer any comment on missed exams or the delay in posting job notifications. The UPSC exam, considered the toughest nut to crack in the administrative services sector, has also changed certain criteria related to age and recruitment for Jammu and Kashmir’s aspirants. Till 2019, the candidate’s maximum age limit was relaxable by five years if domiciled in the state of Jammu and Kashmir. The notification issued in 2020 offered no such relaxation.

Where normal recruitment for a Grade 4 post takes nearly three to five years, many aspirants will be ineligible now to appear for the tests due the age bar, hurting their employment chances.

Shahnaz Hussain fled to a West Asian country to find work in the wake of the communication blockade that came into force in August last year. “I have waited long to appear in the exams conducted by the state government. And disqualification means a years-long wait for another opportunity,” he said, adding, “My family feared for me after I was depressed and was consulting a psychiatrist on a monthly basis as my hopes of getting a job had already died out due to the age bar.” Shahnaz celebrated his 40th birthday on 23 January this year in Saudi Arabia.

In a recent disclosure, the Jammu and Kashmir administration informed the Centre about the identification of as many as 84,000 vacancies across various departments run by the government. The selection process to fill these government posts will solely depend on written tests. But with the slow internet speeds, even the process of filling application forms (which in most cases, is online) seems too difficult for aspirants right now.

Further, the Jammu and Kashmir Bank — that had been accommodating some of the unemployed youths — has nullified the results of last year’s examinations and those who were selected are expected to appear again. In 2019, the only private sector bank of Jammu and Kashmir was itself converted into a PSU, thus, putting and end to its ability to independently recruit. The examinations for this bank will henceforth be conducted by IBPS.

Showkat Ahmad, a resident of South Kashmir’s Anantnag district, has already started a shop after he heard the news of his disqualification in the bank exams. “I had already crossed the preliminary level test conducted in April 2019,” he said. He has a family of 10 people and with a shop in a remote rural area of Anantnag, Showkat’s finances are stretched.

The coronavirus scare could also make matters worse when it comes to the recruitment process in the Union Territory. With the first case of COVID-19 being confirmed in the territory, life and schooling has already been interrupted. The aspiration of earning an employment opportunity seems an impossible dream, at least in the near future.

Coronavirus Crisis Could Cost the World $2 Trillion, Some Nations May be Pushed Into Recession: UN