Aam Aadmi Party (AAP) leader Tahir Hussain was suspended from the primary membership of his party this evening, after he was charged with murder and arson in connection with the death of Ankit Sharma, the Intelligence Bureau (IB) employee found dead in one of the areas in northeast Delhi most affected by violence over citizenship law protests.

Mr Hussain will remain suspended until the charges against him are investigated and he is cleared, a tweet by Delhi’s ruling AAP added.

Ankit Sharma, whose body was found in a drain near his home in Jafrabad, was allegedly attacked by a mob and stabbed to death on his way home on Tuesday. The post-mortem report, released today, indicated multiple stab wounds across his body.

After the body was found on Wednesday, his father Ravinder Sharma, who is also an IB employee, alleged supporters of Mr Hussain had killed his son. He further alleged his son had been shot after he was beaten.

Allegations Mr Hussain was involved in the death of Ankit Sharma were also made today by BJP leader Kapil Mishra, whose pro-citizenship law rally in northeast Delhi’s Maujpur has been linked to the violence that has scarred the national capital since.

“The killer is Hussain. In the video, he can be seen with the masked boys carrying sticks, stones, bullets and petrol bombs. He was constantly talking to Kejriwal and AAP leaders,” Mr Mishra, who has a history of incendiary comments, was quoted by news agency ANI.

Videos shared with NDTV show a man believed to be Mr Hussain on the roof of a building near Ankit Sharma’s residence with some men who appear to be involved in stone-throwing. There are allegations petrol bombs were thrown from the roof

In the videos, thick smoke rises from below the same building, suggesting Mr Hussain’s house too may have been under attack.

Mr Hussain denied the allegations in a video yesterday and today. He said his family and he “went to a safe place in the presence of police on 24th” and never returned home after that.

Delhi Chief Minister Arvind Kejriwal responded to the allegations today, saying: “No one, be it any party, should be spared if they are responsible for inciting violence”. 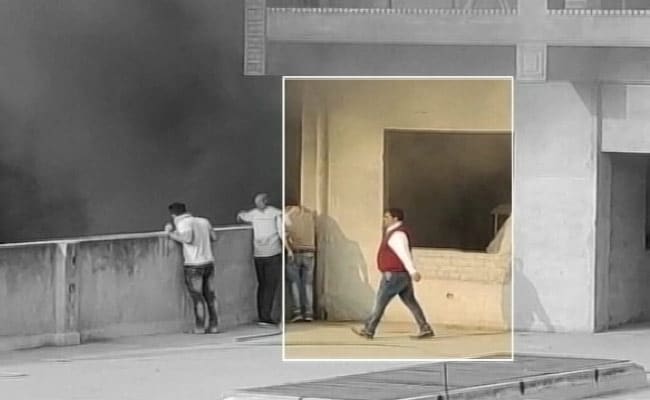 At least 38 people have been killed and over 300 injured.

Delhi Police and the Home Ministry, to whom the cops report, have both said the situation is under control, but the violence has not abated and the death toll has climbed steadily since the first day.

View: The violence in Delhi – and how it was finally contained -- has lessons for all