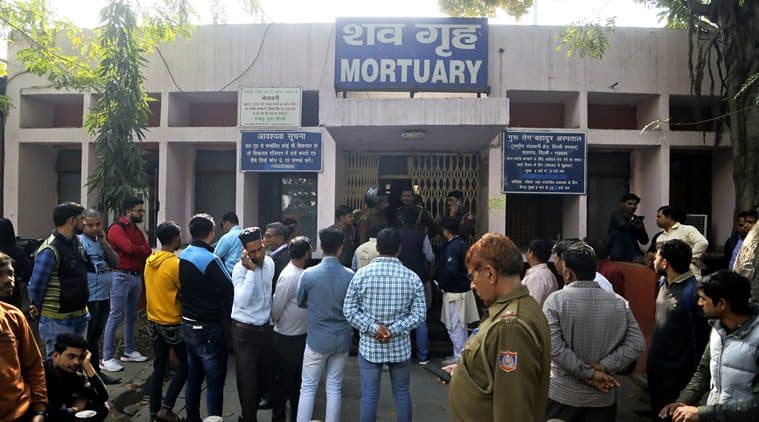 Relatives wait for bodies of victims outside the GTB Hospital mortuary in Delhi on Thursday. (Express photo: Abhinav Saha)

In a significant order at a time when questions are being raised over the delay in conducting the post-mortem of those killed in the riots in northeast Delhi, a local court has directed police and a hospital to shoot videos and photographs of the examination of the body of a man who succumbed to head injuries on February 26, a day after he was released from detention.

The order was issued Saturday by a Delhi court on a petition moved by the brother of the 23-year-old victim, whose identity is being withheld on request from the family’s lawyers. The family has alleged that the deceased “suffered injuries during police detention, ultimately leading to his death” at LNJP Hospital.

Claiming that they were not allowed to see the victim despite repeated visits to the police station, the family had moved the court with a plea to direct Delhi Police to conduct inquest proceedings under section 177 CrPC to ascertain the cause of death. 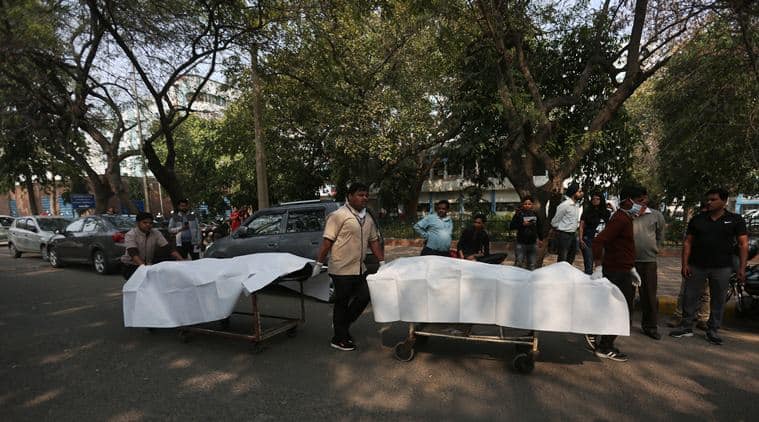 At least 45 people were killed in the riots in northeast Delhi over three days starting February 24. (Express photo)

Accepting the plea, the court ordered police to follow guidelines laid down by the National Human Rights Commission (NHRC) “in respect of video filming and photography of post-mortems”. The directions came after police informed the court that the body is still preserved in the mortuary and the post-mortem examination is yet to be conducted.

At least 45 people were killed in the riots in northeast Delhi over three days starting February 24, with families of many victims accusing police and authorities of delaying the post-mortem and handing over of the bodies.

The court’s order came on a plea filed by advocate Maneka Khanna on behalf of the 23-year-old’s family.

“IO (Investigating Officer) has filed a reply as per which they have received from LNJP hospital regarding death of deceased vide DD No. 38 dated 27 February, 2020 PS Bhajanpura. It is further submitted that the body is preserved in the mortuary of LNJP hospital and post mortem is likely to be conducted today or tomorrow,” the judge noted in the order.

In the plea, the victim’s family stated that “despite the death having occurred on February 26, police officials have taken no action whatsoever towards conducting legally mandatory inquest proceedings under Section 174 Cr.P.C”.

“In the present case, as the deceased suffered injuries during police detention, ultimately leading to his death, it is necessary that the post-mortem examination be held as per guidelines issued by the Hon’ble Ministry of Home Affairs, directing that the examination be duly video-graphed and photographed,” the plea stated.

In the plea, the brother of the deceased submitted what he claimed was a timeline of the incident. “On February 24, (the victim) left home at around 4 am. At around 8 pm, the family got a call from a relative that the deceased was at GTB Hospital,” the plea stated.

“At 9 pm on February 24, the family members of the victim went to GTB Hospital however, they could not locate him and no one at the hospital gave them any information,” the plea stated.

At 11 pm, according to the plea, the family members went to the Jyoti Nagar Police Station after coming to know that the 23-year-old had been arrested. “A police officer at the PS informed them that deceased (the victim) was inside and would be released the next day. However, they were not allowed to meet the deceased,” the plea stated.

Editorial | Acts of solidarity, empathy and bravery in Northeast Delhi hold out hope

The plea stated that the deceased was “badly injured” and had “bruises on his legs and head and he couldn’t walk”. “He had two stitches each on both sides of his head and he told them he had been taken to GTB Hospital as he had been hit on the head by a gun. The deceased could barely move,” the plea said.

On February 26, family took the deceased to LNJP Hospital in an ambulance. “They reached LNJP around 2/2:30 pm. The deceased was not given immediate treatment at LNJP Hospital. Some diagnostic tests were conducted, however ultimately, the deceased succumbed to his injures on 11 pm,” the plea said.