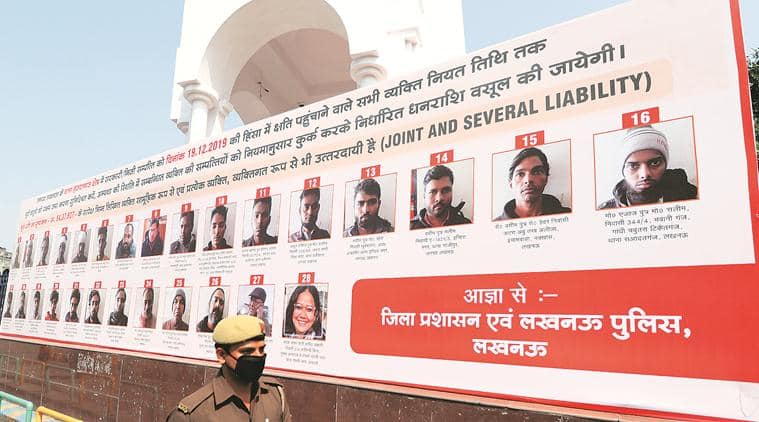 The Lucknow administration had started putting up hoardings with photographs and addresses of those booked in cases of alleged vandalism. (Express Photo by Vishal Srivastav)

Calling it an “an unwarranted interference in the privacy of people”, the Allahabad High Court Monday ordered the Uttar Pradesh government to remove hoardings of those booked in cases of alleged vandalism and arson linked to protests against the Citizenship Act in Lucknow on December 19.

A division bench, comprising Chief Justice Govind Mathur and Justice Ramesh Sinha, which took up the matter suo moto, asked the Lucknow district authorities to submit a report by March 16 on the removal of posters that carried photographs and addresses of those booked.

“In the present case, the cause is not about personal injury caused to the persons whose personal details are given in the banner but the injury caused to the precious constitutional value and its shameless depiction by the administration. The cause as such is undemocratic functioning of government agencies which are supposed to treat all members of the public with respect and courtesy and at all times should behave in a manner that upholds constitutional and democratic values,” the judgment read. 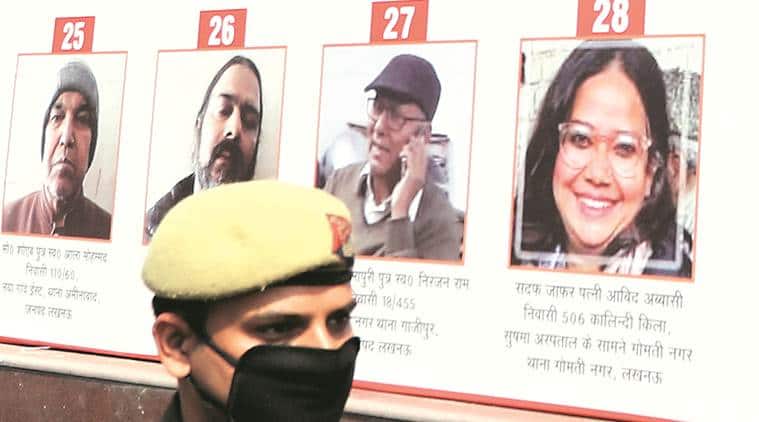 The posters were put up by the Lucknow administration. (Express photo)

Citing the Right to privacy as a fundamental human right recognised by the United Nations, the Allahabad HC said, “Privacy underpins human dignity and key values of a democracy. In our country, where privacy is not explicitly recognised as fundamental right in the Constitution, the courts have found such right protected as an intrinsic part of life and personal liberty under Article 21 of the Constitution of India… the slightest injury to it is impermissible as that may be fatal for our values designed and depicted in the preamble of the Constitution.”

The court had on Sunday reserved its order on the matter, calling it an “absolute encroachment on personal liberty”.

The activists had said they would approach the court against the UP government’s move as it posed a “serious threat” to their lives, amounted to gross “violation of privacy” and violated the “fundamental right to life and liberty”.

Jafar, Shoaib, and Darapuri face charges of rioting, attempt to murder and arson at the Hazratganj police station. Police have not yet filed the chargesheet in the case. Darapuri was arrested on December 20 and released on bail on January 7.

The protests on December 19 had turned violent in the Hazratganj, Hasanganj, Kaiserbagh and Thakurganj areas, leading to one death due to gunshot injuries. Police have denied charges that they fired at the protesters.

Minutes after the order, the Samajwadi Party, Bahujan Samaj Party and Congress welcomed the Allahabad High Court decision. “The government neither has the knowledge of the right to privacy of citizens nor any respect for the constitution. The people of the state are fed up with this government. We welcome the high court’s decision,” PTI quoted SP supremo Akhilesh Yadav as saying.

“The BSP welcomes the honourable high court’s order directing the administration to remove hoardings of those accused of violence during the anti-CAA protests after taking suo motu cognisance of the matter,” Mayawati said in a tweet.

Congress state president Ajay Kumar Lallu said the court’s decision had “exposed” the undemocratic and anti-constitution stand of the Adityanath government. “The right to privacy is a fundamental right but the government ignored it and put up posters of the accused which was unconstitutional and undemocratic,” Lallu said.

No mercy on rioters in ‘Yogi raj’: CM’s advisor

On the high court’s order, Mrityunjay Kumar, media advisor to UP chief minister, said on Twitter, “The high court’s order to remove the posters of rioters needs to be understood in right perspective. Only the posters will be removed, not the charges against them. We will continue this fight to expose the identity of these rioters. They will not receive any mercy in ‘Yogi raj’.”

Holi 2020: Here are Your Complete Skin and Hair Care Guidelines