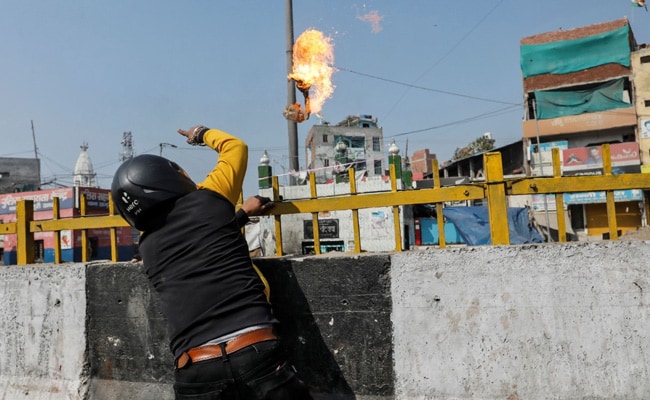 Delhi violence: Clashes erupted in the city on Sunday between pro and anti-CAA protesters.

The Karnataka BJP, which faced action on Twitter earlier this month over incendiary tweets, on Friday said protests against the controversial Citizenship Amendment Act (CAA) were “fake” and the violence that followed was “the most well-planned assault on the Idea of India”.

The handle, notorious for tweets targeting Muslims, blamed the clashes that erupted in Delhi between people demonstrating for and against the CAA on “so called ‘Peacefuls'” – a known right-wing slur for Muslims.

ZERO – Number of Indians who lost their Citizenship due to the #CAA.

40+ – Number of Indians who lost their lives due to the #CAARiots.

The fake protests against CAA and subsequent riots by the so called Peacefuls are the most well planned assault on the “Idea of India.”

Many people on social media called out the tweet for completely ignoring the role of Delhi BJP leader Kapil Mishra’s provocative speech for triggering the violence or the failure of the Delhi Police, which reports to the former BJP chief and Union Home Minister Amit Shah, in controlling the riots.

Why calling protests as fake?? It is your Home ministers complete failure to maintain law and order in India’s national capital Delhi… Unnecessarily to hide BJPs all failures like unemployment,GST, economy,notebann BJP trying to implement CAA,also CAA is unconstitutional..

What about your hate spread by Kapil Sharma , Giriraj Singh , thakur & others . You people hardly need Pakistan to destroy you , your arrogance & hatred is enough for destruction of Mahatma’s India . Keep going on ????????

Today you killed 40 Indians, tomorrow how many will you kill on the name of religious based anti constitutional CAA.

What your elected strong Govt is doing.. why can’t they nip the bud

Wow. With a great honesty you’re accepting that complete law and order failure of North East Delhi. Hang on don’t delete this also.

Earlier this month, the Karnataka BJP had tweeted a video of Muslim women standing in queue to vote in the Delhi elections, showing their voter ID cards, with the snarky caption: “Keep the documents safe, you will need to show them again during NPR (National Population Register) exercise.”

Soon after, the party unit’s Twitter handle was blocked by the social media platform for 24 hours after many accused it of encouraging Islamophobia.

NPR has been widely criticised by opposition parties as a precursor to the government’s planned NRC or National Register of Citizens which intends to make Indians prove their citizenship with documents that many poor or illiterate do not possess.

Many fear that combined with the already imposed CAA – which promises citizenship to only non-Muslim refugees from Pakistan, Afghanistan and Bangladesh – the NRC can be used to make millions of Muslims stateless.

The government has denied the allegation and said the CAA only intends to help those who have faced religious persecution. In recent weeks, it has gone back on its rhetoric on the NRC which was announced by Amit Shah in parliament as “it will certainly happen”.

The CAA, which was cleared by parliament in December, has triggered deadly protests in the country which left at least 25 dead till Sunday. Since then, at least 42 more people have been killed as large-scale violence erupted in northeast Delhi and hundreds of homes and shops have been burned to the ground.

HC Seeks Response from Centre, Delhi Govt on Plea for FIR Against Gandhis Over Hate Speech