Without lockdown there would be 73,000 cases in India by now; 9.45 lakh under surveillance: Govt&nbsp | &nbspPhoto Credit:&nbspTwitter

New Delhi; The Union Health Ministry’s in its daily briefing on Covid-19 on Friday said India was successfully able to increase the doubling time of infections through effective surveillance, early lockdown, contact tracing among other measures.

Dr VK Paul, Niti Aayog member and Chairman of Empowered Covid-19 Group said as on Mar 21, the doubling time (number of days for 100% increase in cases of the viral infection) of cases was around 3 days. The results became evident from March 23, due to travel restrictions imposed earlier. On April 6, this growth rate further slowed thanks to the nation-wide lockdown, he added. This rate has now increased to 8.6 days in the fourth week of the lockdown.

“During the initial period of lockdown, the doubling time of cases decreased since people infected already were being detected, later it improved as lockdown put a brake on the spread of the infection,” he further added.

There would have been an estimated 1 lakh cases of the disease in India had the timely decision of lockdown been not taken by the government, he further said. 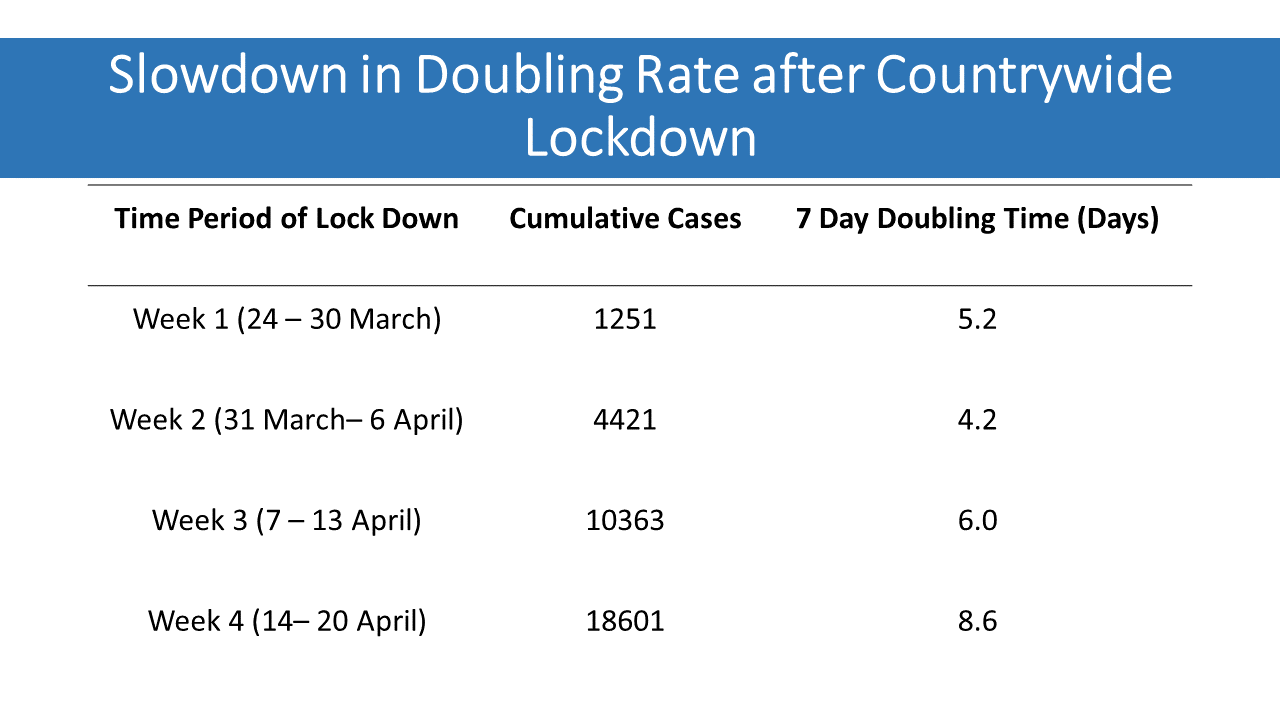 Describing the surveillance system as a “primary weapon” in the fight against coronavirus, Dr Sujeet Singh, Director, National Centre for Disease Control (NCDC) said about 9.45 lakh people are being monitored in the system. “Prompt sampling of these people are taken upon detection of symptoms,” the NCDC Director said.

Singh said this network is set up at the district level so that household survey, quarantine and isolation are done as part of cluster containment plan. It is being extensively used to gather epidemiological intelligence and take required measures accordingly. India started the surveillance mechanism even before the first case of the infection was reported in the country, which played an important role in helping us contain the spread of the disease, he added.

“Starting from stopping of international flights to stop transmission of infection from abroad, graded steps including lockdown were taken to halt internal chain of transmission of the infection,” he added.

Ministry of Health Union Ministry of Health and Famly Welfare Joint Secretary Lav Agarwal said, in the last 24 hours 1,684 new cases were discovered and 491 people recovered while 17,610 continue to be under medical supervision across the states. There are now 23,077 cases of deadly pathogen across the country.

The total number of persons who were cured since the start of the outbreak in India now stand at 4,748 – which is a recovery rate of 20.57%. Agarwal hailed the development as “a very positive development”.

“We should see that these districts maintain the status of no new cases and also, new districts get added into this category,” he added.

The MHA during the briefing flagged lockdown violations as a “serious health hazard” which pose a serious health hazard to public and risk for spread of Covid-19. Incidents ranging from violence on frontline healthcare professional and police personnel; violations of social distancing norms; opposition to setting up of quarantine centres are prime concerns.

The Centre constituted five Inter-Ministerial Central Teams (IMCT) to make an on-spot assessment of the situation, issue necessary directions to state authorities for its redressal and submit their report to the government in the larger interest of the general public. These IMCTs focus on a range of issues such as compliance and implementation of lockdown measures as per guidelines; supply of essential commodities; social distancing; preparedness of the health infrastructure, the safety of health professionals & conditions of relief camps for labour and poor people.

During the briefing on Friday, Home Ministry’s Punya Salila Srivastava said the Ministry of Home Affairs (MHA) constituted four more IIMCTs for Ahmedabad, Surat, Hyderabad and Chennai. There are now 10 IMCTs including 6 such teams formed earlier. Each is headed by an Additional Sectretary-level officer. Srivastava said Indore IMCT reported that there are 171 containment zones in the city, of which 20 are critical.

Covid-19s biggest lesson is that we become self-reliant: Modi