DHFL promoters Kapil and Dheeraj Wadhawan have been detained in Mahabaleshwar for violating Section 144. Police found 25 people, including their family members, at their farmhouse.

Satara SP Tejasvini Satpute has confirmed that members of the Wadhawan family (23) were detained from Mahabaleshwar and have been placed under institutional quarantine at government hospital in Panchgani.

Satpute added that they have been booked under IPC 188, 269 and 270 and investigation will commence soon.

The Wadhawans reached Mahabaleshwar on April 9 morning. The locals came to know about people coming from Mumbai and informed the administration. The tehsildar then took action against the Wadhawans when they were at the farm house.

Amitabh Gupta, Principal Secretary, Home Department of Maharashtra government, issued a special pass to them to travel from Khandala to Mahabaleshwar for a “family emergency”. 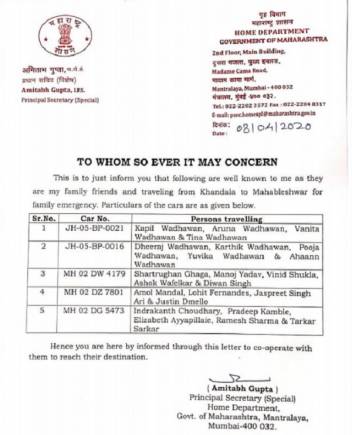 “An investigation will be conducted about how 23 members of the Vadhawan family got permission to travel from Khandala to Mahabaleshwar,” tweeted Maharashtra Home Minister Anil Deshmukh.

The Enforcement Directorate on March 16 had issued fresh summons to DHFL’s former promoters Kapil and Dheeraj Wadhawan, the co-accused in the Yes Bank case, to appear before the agency on March 17.  The Wadhawans reportedly skipped the same, citing the COVID-19 pandemic for their non-appearance in connection with the money laundering probe.

The agency on March 7 had registered a case against Yes Bank co-founder Rana Kapoor, the Wadhawan brothers, RKW Developers, and Doit Urban Ventures Ltd, a company owned by daughters of Kapoor on March 7.

RKW is another company controlled by DHFL promoters. Kapoor, his family members, and others are accused of laundering Rs 4,300 crore by receiving alleged kickbacks in lieu of extending sizeable loans to big borrowers through the bank. The loans later turned non-performing assets.

Time to show-off your poker skills and win Rs.25 lakhs with no investment. Register Now!